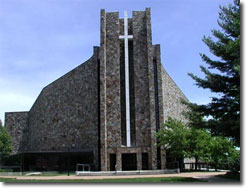 The Equality Ride stop at Covenant College is April 2, 2007.

The Equality Rider organizing the stop at Covenant College is Joey Heath.

We arrived at the campus of Covenant College early in the morning. We were immediately met with by a warning from the administration and an official warning from the police that if we stepped on campus we would be arrested for trespassing. We were told by the police to stand on the edge road because the grass right off the road was campus property and would be trespassing. So would stood in vigil for a little while and waited to see if students would come down and speak with us. We could see at the top of the hill, heads of students poking out behind the hedges. Slowly a few students came down to speak with us. Then a few more followed and before we knew it there were about 50 or 60 students down talking to also. Around 11 am some students brought out lunch to be shared with us. So we ate and talked with the students. This continued on until it was time for the reading of the new covenant for Covenant College. The new covenant was read and then Bronwen Tomb, Rachel Loskill, Jarrett Lucas, and Adam Britt stepped on to campus to carry the covenant to the administrator who we had been in contact with but had not come over to speak with us. They were immediately arrested and then taken to the county jail. After a short period of vigil and a prayer with the students we returned to our conversation until it was time to leave. We then went from there to a coffee shop in Chattanooga frequented by Covenant students. We had a large turn out and were able to have more conversations. While there we found out that the four arrested would be held over night. The day ended with good-byes with students and an end to good dialogue. The next morning we picked up our four riders at the jail and headed on to Greenville, SC and Bob Jones University.

Register to help with the 2007 Equality Ride’s stop at Covenant College.