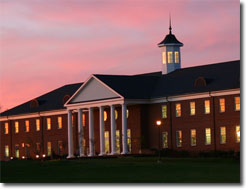 The Equality Ride stop at Patrick Henry College is April 12, 2007.

The Equality Riders organizing the stop at Patrick Henry College are Robin Reynolds and Joshua Polycarpe.

Our visit to Purcellville, Virginia began with an 8 am breakfast at the home of the Cobb family, a lesbian couple with two sons (one of whom is in college). Community support was amazing and included the local LGBT advocacy group, Equality Loudoun, the local Unitarian Universalist Church and many others.

The Cobbs also allowed us to use their home as "base camp". There, we were able to discuss the days plans, have a non-violence training for those participating in the day’s events and also find refuge from the hail storm which caused us to end our vigil.

Patrick Henry College locked down its campus Thursday, April 12th and requested law enforcement authorities to charge any unregistered person who attempted to come on campus with trespassing.

We were met with over 120 police officers.

There was no Christian welcome or showing of ministry from the Patrick Henry community. We only saw a "sea of blue" and the occasional student standing on the steps of the of a school building. The "Gospel of Inclusion" we sought to bring was rejected as it did not agree with their "Gospel of Exclusion". We posed a great threat, the same threat that Jesus posed to the Pharisees. We brought with us the message of God’s love and the requirement that all Christian’s have… to love their neighbor as themselves, which is the root of all the laws. Not only are some of us gay Christians but God has also deemed us worthy of ministering to those who hurt and have false things said about them in the name of Christ. Jesus called those people "blessed".

The law enforcement presence on the campus was overwhelming, as officers from the Town of Purcellville, Loudoun County and State Police staked out the perimeter of campus. Members of the Purcellville community and the state of Virginia are still in a uproar over the use of so many tax dollars for a peaceful protest. Visit EqualityLoudoun.org for more info on the on going debate.

The Equality Riders, along with supporter from the Purcellville community, Washington D.C. and three other states held a vigil for over five hours battling intense rain and a hail storm. We had hoped that some students from the school would exit campus and have a conversation with us. We also held up a sign with a phone number that students could call, for those that didn’t feel, due to their administrations response, that they could speak to us. We received no calls.

Joshua Polycarpe, site co-organizer and Jarrett Lucas, the co-director of the east bus, were arrested for criminal trespassing as they crossed the property line to deliver invitations to a community dinner that night to the PHC community.

Two students were allowed to speak to the media after being screened by the administration. They spoke in support of the views of the college.

Equality Loudoun sponsored a community dinner at the White Palace Restaurant in Purcellville. Many community members, including local clergy came, to break bread with us. Only one student attended the dinner. He was a reporter for the school paper and made it known that this was the only reason for his attendance. After eating, a multimedia presentation was viewed along with Equality Riders sharing their stories. Many were empowered and encouraged.

Our thoughts and prayers are extended for the PHC community. We pray that these leaders of tomorrow, like us, began to dialog with the rest of the world and enrich their faith by interacting with other children of God. May peace be with them and also with you. Always.

Register to help with the 2007 Equality Ride’s stop at Patrick Henry College.