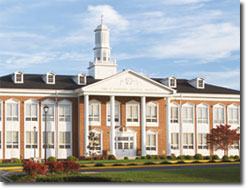 The Equality Ride stop at the University of the Cumberlands took place on March 28, 2007.

We arrived at the main entrance of the University of the Cumberlands at 9:30am on March 28, 2007. For weeks, local law enforcement ignored our attempts to contact them and the school administration had been un-willing to work with us in letting us on campus for a day of meaningful and open dialogue on the issues surrounding faith and sexuality. We had no idea what we were getting ourselves into once we stepped of the bus, but we would soon find out.

As we filed off the bus onto Main Street in Williamsburg, KY, we were met by Dr. Michael Colgrove, Vice President of Student Affairs, and Williamsburg Chief of Police Denny Shelley.

As we left the bus and formed up in our usual vigil-style line, however, the Police Department informed us that we could not stand still on the sidewalk and we would have to keep moving. As we attempted to break up our large group into groups of two or three, we were still told that we could not stand on the sidewalk. Being threatened with arrest if we did not keep walking, we decided that conversation with students while walking up and down Main Street for hours was the right decision, even though we knew – and told the Police Department – that their demands to keep walking were blatant abridgments of our First Amendment rights.

It seemed like an intimidating environment for students–who may be scared to have this conversation in the first place–to come out and talk to us. So it was surprising when so many students did come, and submitted to the police intimidation and walked up and down along with us. Two of them even went so far as to refuse the police officers’ un-Constitutional demands and restrictions and stood still on the sidewalk. They got arrested for it. Our founder, Jake Reitan, also got arrested as he tied his shoe.

For four hours we walked up and down Main Street. It’s hard to say just how many students we talked to, but it was many and our conversations were good.

While Matt and our fellow Rider Robin Reynolds continued working with the Police Department, various city and county officials, the ACLU and the administration, the 23 other Riders spoke to students. One attorney, who called the Police Department on the Equality Ride’s behalf, was told "Shut the –expletive– up and get the fags off the street." By the end of the day, Robin had spoken to Mayor of Williamsburg, the City Attorney, the Judge Executive of Whitley County, the Chief of Police and the Whitley County Sheriff; she would receive only one apology on behalf of the local governing bodies.

At 4 pm the Equality Riders moved downtown to the Williamsburg Courthouse square for a rally. The police followed in dozens, and a group of protestors came to stand on the periphery. Students from the University of the Cumberlands also came, and an administrator took pictures of them. Former student Jason Johnson, who was kicked out of the University a year ago after identifying himself as gay on his MySpace.com profile, spoke at the rally. Matt, Bronwen and Co-Director Jarrett Lucas spoke, followed by Jordan Palmer (President of the Kentucky Equality Federation) and Wes Wright (Legislative Liaison, Kentucky Fairness Alliance).

Although there were many frustrations during the day – including not being on campus and dealing with excessive police force – we are so glad that we stopped at the University of the Cumberlands and in Williamsburg, KY. Without a shadow of a doubt, we know that we have made an long-lasting impact – not only on students at the University, but also with many members of the Williamsburg community.

Many thanks go out to Jordan Palmer, Wes Wright and Jason Johnson (and his mother and boyfriend, for their support).

Our stop, however, would not have been possible without one group of folks: Cumberlands students. The open hearts and minds they showed and the bravery of the two who were arrested will continue to inspire us.

We will never forget Williamsburg, the University of the Cumberlands and the many great people we met.

Read about the University of the Cumberlands and GLBT equality.

Schedule for the Soulforce Equality Ride’s visit to the University of the Cumberlands and Williamsburg, KY, area:

Wednesday, March 28, 2007, 10:00am
Meet up with the Equality Riders & Community Members on Main Street (MAP),which runs through the campus of University of the Cumberlands. Here the Equality Ride will attempt to engage the University of the Cumberlands community in honest, open and thoughtful conversation on the issues surrounding anti-LGBT policies and other issues affecting LGBT students.

Wednesday, March 28, 2007, 5:00pm-6:30pm
Community Rally at the Williamsburg Courthouse Square
100 Main Street, Williamsburg, KY (MAP)
Speakers at the Rally include Jarrett Lucas (Co-Director of the Eastbound Equality Ride Bus), Matt Hill Comer (Co-organizer of the visit at Univ. of the Cumberlands), Jordan Palmer (President, Kentucky Equality Federation) and Jason Johnson (student expelled from University of the Cumberlands due to its anti-LGBT policies) and others.