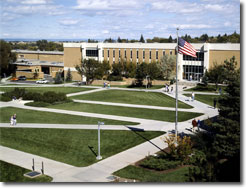 The Equality Ride stop at Brigham Young University – Idaho was April 16 and April 17, 2007.

The Equality Riders who organized the stop at Brigham Young University – Idaho are Michael Cramer and Cray Gondek.

Mike and Cray would like to thank all those who helped them organize the stop and they also send their thanks to everyone who showed up to all of the community events.

The 2007 Soulforce Equality Ride stop at Brigham Young University-Idaho was a success. Riders talked with dozens of students during our vigil on the first day, while other Riders stood quietly with photos of their families. At 2 PM, after several attempts to contact the administration to request again to be allowed on campus, eight Riders crossed over the property line and were met by officers of the Rexburg Police Department who were sent by the school. Unfortunately, BYU-ID made the decision to have all eight Riders who walked onto campus promptly arrested, escorted to police cars and driven to the police station. There, they were booked, photographed, fingerprinted and released. The rest of the Westbound Soulforce Equality Riders stood quietly for several hours following the arrest of their friends.

Soulforce has decided to place the focus of the stop on the family for several reasons. First: the importance of family in LDS tradition. Much of what goes in the church is centered on the family. Secondly, many of God’s LGBT children are told again and again that their identity is tearing their family apart and is somehow ruining that important family structure when the truth is that policies such as those at BYU-ID (which can be found here) are what is tearing parents from children, leaving families in shreds. Students take what they learn at BYU-ID into their communities and continue this cycle of hate. It was time to circle the wagons around our gay, lesbian, bisexual and transgender brothers and sisters.

The first day of our vigil, April 16, was also the day of the tragic events on Virgina Tech’s campus. In light of those events and out of respect for those involved, Soulforce cancelled its vigil for April 17. Instead, the Westbound Equality Riders spent the day at Nature Park in Rexburg doing landscaping, picking up trash and bettering the community.

Again, Mike, Cray and the rest of the 2007 Soulforce Equality Riders would like to extend their most sincere thanks to all involved with the stop in Rexburg, Idaho. Special thanks to the police department and to the brave students who came out to support us. Please keep Bringham Young University-Idaho in your thoughts and prayers so they will eventually see the value in this conversation and value their lesbian, gay, bisexual and transgender students enough to allow it to take place on campus.