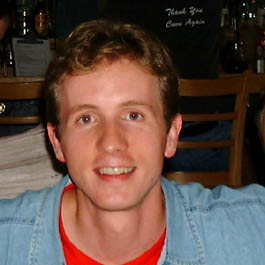 On October 23, 1999, I will return to my alma mater, Rev. Jerry Falwell’s Liberty University in Lynchburg, Virginia, for a historic meeting. I will be joining the Rev. Mel White and Falwell for this historic, first time meeting between a leading Religious Right leader and a small group of gays & lesbians and their allies to begin a discussion on the prevention of Hate Crimes. What makes my participation somewhat unique is that I am one of only a handful of openly gay graduates of Liberty University that will return Lynchburg and face not only Falwell but also my fundamental Baptist heritage.

Being gay and a graduate of Liberty, Class of 1991, I have had a unique perspective over the last 8 years to the destructive rhetoric that has poured out of Falwell’s direct mail fundraising campaigns. This is the first time Falwell has welcomed a group of openly gay & lesbian individuals to meet with him and I am honored yet fearful as to the discussion that we will begin. Already many groups from the gay & lesbian community and the Christian Right have denounced the meeting. The sole focus of the meeting is to begin a discussion of Hate Crime Prevention. My personal goal is to provide a gay face and name as one of Falwell’s Young Champions, a term he uses for graduates and students of Liberty, in a sincere effort to confront the notion of "loving the sinner and hating the sin."

It is my goal to confront and discuss with Falwell the mean-spirited direct mail that has been sent out from Liberty from the past several years that has been specifically targeted against gays & lesbians. As a child reared in a Fundamental Baptist home, I have a great understanding of the Religious Right. As a graduate of Liberty, I feel it my obligation to participate. As a gay graduate of Liberty, I understand discrimination first hand.

I was fired from my first job out of Liberty when I disclosed to my employer, Richard Viguerie, a Religious Right/political ally of Dr. Falwell. Viguerie had recruited me directly from Liberty to work at his then start-up, non-for-profit, United Seniors Association. On Viguerie’s staff, I worked directly with Sam K. Pate, Dr. Falwell’s brother-in-law, and learned the industry of political, direct mail fundraising. It was while I worked for Viguerie that I met Marvin Liebman. Liebman was considered by many as the "Father of American Conservatism" and as the founder of the political direct mail fundraising industry. Liebman was also a long time conservative and had mentored Viguerie, Bauer and many others within the Republican party and Christian Right before "Coming Out" at age 69.

Upon a successful review and promotion at United Seniors Association, many of my colleagues were sharing personal stories: breast cancer, marital issues, etc. When they asked me how I was adjusting to Washington, DC, I felt comfortable in the environment that had been created to share that I was gay. I was promptly fired 7 days later by Viguerie. My direct supervisors said "we love you Brian but do not feel that you are headed in the same direction as us." Viguerie paid my salary for 6 months but asked me to leave and not come back to the office. I was devastated. I truly had never been discriminated against in my life.

Liebman and Gregory King, former communications director for the Human Rights Campaign Fund, tried to encourage me to come out openly. King wanted me to hold a press conference with Liebman, who by then had made national headlines by coming out at age 69. It was 1993. I was scared and did not have the support of my family. I truly felt that I might lose my family if I came out publicly. I had recently come out to some of my friends from Liberty and had endured losing people that I thought had loved me. So, I declined any and all pubic attention of my situation. I was also embarrassed.

I did however begin a close relationship with Liebman. Marvin was one of my closest friends that I ever had. He taught me courage and he taught me when it is appropriate to speak out. Over the years, I have spent countless hours talking with friends about my experiences at Liberty and growing up in the environment that my parents remain in today. I have been very blessed in that I have had numerous opportunities to sit and talk with amazing lesbian & gay civil rights leaders such as: Larry Kramer, Elizabeth Birch, Dave Pallone, Paul Monet, Candace Gingrich, Betty DeGeneres, Betty Berzone, Chris Bull, Andy Tobias, Tim McFeely, David Smith, Cathy Nelson, Winnie Stackelberg, Donna Redwing, Tim Gill, Ron Ansin, and many others.

I was brought up with the scripture, "to whom much is given, much is required." On March 31, 1997 as I held the hand of Marvin for the last time. I had no idea what if any role that I would play one day in the lesbian & gay civil rights movement. Up to that point, I felt that by taking care of Marvin that I was doing my small part. Later that year, a close friend asked me if I would consider leaving my job, taking a salary cut and work for the Human Rights Campaign, the nation’s largest gay & lesbian political organization. I joined HRC and it changed my life. The reason that I will be able to stand on October 23, 1999 on Liberty Mountain and face my past is in no small part the unconditional love and support of my partner, Jeff Sachse, whom I met while working for HRC.

Jeff and I met and fell in love in the spring of ’98. Later that summer, I moved to Chicago. Jeff is the Co-Chair of the Board of Directors for the HRC and supports me 100% in this effort to speak out openly for the first time as a graduate of Liberty.

I have been asked our numerous occasions to share my story by friends in the gay politics & media and while at HRC. I did not take those opportunities because out of a fear surrounding my family – particularly my uncle, Rick Carter, a Baptist minister and executive vice president of Baptist Bible College in Springfield, MO, which is Dr. Falwell’s alma mater.

So, you might ask, "What’s changed to make you willing to speak-out?" There are two reasons. Firstly, the unconditional love and support of my partner and his family. Secondly, the death of Matthew Shepard last year. I made a vow last October that if there were an opportunity for me to speak out publicly – I would do it. When Matthew died last year, he was not much younger than I was. I am 30 years of age and not na暠ve about the meeting with Dr. Falwell. I know that it is going to be tough. The KKK, Rev. Fred Phelps, the left-wing gay group "Oral Majority", and others on both sides of this issue have already filed demonstration petitions in Lynchburg.

I am a little scared – not only because of the demonstrators and news media – but also, I know that while I am completely out to my family, this may cause me personal lost with certain family members. All of this is a small price compared to the price that Matthew paid for being open and honest about his life.

I will stand on Liberty Mountain as an openly gay graduate. I will implore Dr. Falwell from my heart to stop the hate mail. My words may fall on deaf ears but I do feel that it is a positive step and one that I am ready to make in a sincere effort to bring the issue of Hate Crimes to both the Christian community and the nation. Congress is getting ready to begin hearings on the Hate Crimes Prevention Act.

I want to give a youthful voice to gay America and speak out against the following statement from my parents, Dr. Falwell, and many other religious leaders: "hating the sin and loving the sinner". It leaves little room for tolerance. With no tolerance and gay-bashing rhetoric sent out by Falwell, James Dobson, D. James Kennedy, Gary Bauer and others, misguided individuals can feel empowered to take "God’s judgement" into their own hands.

Matthew Shepard is not able to speak out. His life was ended for one reason, and one reason only-because he was gay! Our country needs to turn attention to preventing Hate Crimes in the new millennium. This should begin in the faith community. For the first time, a powerful right-wing religious leader is willing to sit at the table with gays & lesbians to discuss the prevention of Hate Crimes. It tells me that it is not too late – there is hope for an America where gays & lesbians can feel safe at their jobs, at home and in their community. It may have taken a year but Matthew’s death WAS NOT IN VAIN!