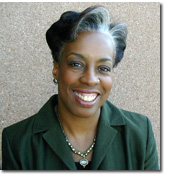 Dani Newsum, a former civil rights and labor attorney in the office of the Colorado Attorney General, is the community education and communications officer at the Chinook Fund, a private foundation dedicated to funding organizations that are committed to social justice. Dani also teaches political science and history at the University of Colorado-Denver; and writes "blog" columns for the Denver Post.com. She appears every Friday night as a panelist on Colorado Inside Out, Denver’s KBDI-Ch. 12’s spirited current affairs program, and also debated political and social issues with conservative Republican and former state senator John Andrews for more than six years on Head On, a point-counterpoint series also broadcast on KBDI.

Dani served as communications and development director for the Gay and Lesbian Community Center of Colorado during 2002-2003. Prior to joining the Center, Newsum directed communications for the Colorado Democratic Party and served as media director for the senate Democrats in the Colorado General Assembly. During the 1990s, she hosted an award winning radio talk show on Denver’s KOA and KHOW radio stations. In 1996 Westword named her Denver’s "Best New Talk Show Host".

Prior to her media and communications work, Newsum was a civil rights and labor attorney in the office of the Colorado Attorney General, representing the Colorado Civil Rights Division and the state Department of Labor and Employment.

Dani serves on the boards of directors of Project Angel Heart and the Color of Justice. She and her husband Ron have been married for 23 years and are the parents of three children.