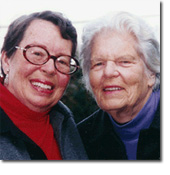 Del Martin (born 1921) and Phyllis Lyon (born 1924) began their commitment on Valentine’s Day of 1953. Fifty-two years later, their love and commitment remain strong. They are two of the founders of the movement for lesbian rights and they courageously stood up for themselves and for others at a time in history when there was universal disapproval and ridicule by society.

Martin is the author of Battered Wives (1976) and the co-author of Lesbian/Woman with Lyon (1972). The Lyon-Martin Women’s Health Services, founded in San Francisco in 1979, is named after them. In 1995, Senator Dianne Feinstein and Congresswoman Nancy Pelosi named them as delegates to the White House Conference on Aging. In 2003 filmmaker Joan E. Biren released a documentary film on the couple, No Secret Anymore: The Times of Del Martin and Phyllis Lyon. The film premiered in San Francisco at the Castro Theater in celebration of their 50th anniversary.

On February 12, 2004, Martin and Lyon received a marriage license from the city of San Francisco and were the first same-sex couple to be legally married in the U.S. Six months later, the California Supreme Court ruled that the city did not have the power to change state law. As a result, their marriage license, and those of more than 4000 others couples, became null and void. There is a case under way in the San Francisco Superior Court to prove the law against same-sex marriage is unconstitutional.

Lyon and Martin still live in the San Francisco home they have shared since 1955. "We love each other and we have similar interests. Our lives were very similar even before we met." Lyon said. And it helps, Martin added, "that we’re both losing our memories at the same time."