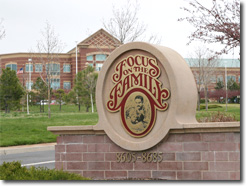 According to the Focus on the Family Web site, more than 200 million people hear the commentaries of Dr. James Dobson every day. He’s heard on nearly 4,000 radio facilities in North America and in twenty languages on approximately 3,300 facilities in over 116 other countries.

In addition to radio, he routinely speaks out against gay and lesbian families on eighty television stations, and in books, cassettes, videos, and DVDs. Untruth about America’s lesbian, gay, bisexual, and transgender citizens flows from the Focus Web site, daily emails, monthly fundraising letters, and traveling conferences that present homosexuality as a sickness.

Backed by an annual budget of more that $130 million, his words cause unnecessary fear and panic . . . dividing parents from their gay sons and lesbian daughters, and neighbors from one another.

A False Focus on My Family: Why every person of faith should be deeply troubled by Dr. James Dobson’s dangerous and misleading words about the lesbian, gay, bisexual, and transgender community