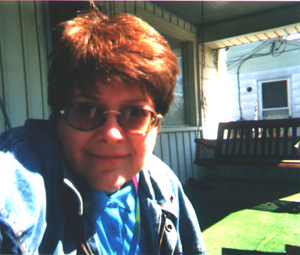 General Suffering – I lived 40 years as half a person. Denial took up a lot of my energy. I denied to myself that I was a lesbian until I was 48 years old. Consciously, I had no clue. I did not feel attracted to women, but I also felt no attraction to men. I was sexless. I was married twice, but it just wouldn’t work no matter how hard I tried. I had 3 children in my first marriage. I am thankful for that; I love my children dearly. Because I was in denial, however, my emotions were half closed off. I just wasn’t there for my children as much as I wanted to be.

Now that I have finally come out to myself, I am about 3/4 of a person. I say that because even though most of my straight friends and coworkers know that I’m gay, I still keep up my guard when I talk to them about my personal matters. I’m always afraid I will disgust them – I know how society looks down on my lifestyle.

Church Suffering – Since I spent most of my life denying my lesbian tendencies, I have never been thrown out of a church. However, I did throw myself out of one. I grew up as an active Presbyterian. About 10 years ago, I was regularly attending a Presbyterian Church in Michigan. I was a Sunday School teacher, a deacon, and a member of the church’s anti-drug puppet team. I was something of an overachiever. The Presbyterian Church did a study of its Official Views on Homosexuality. One day at a deacon’s meeting, our minister announced its official stance. Gays, he said, were to be welcomed at church services but could not hold any office. I was shocked, especially since one of our assistant ministers was obviously gay! Even though I was consciously denying that I was gay, I quite the church.