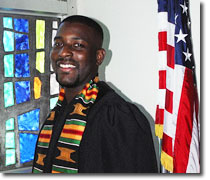 The following is a piece Rev. Watkins wrote about his experience at the Naval Academy for Planetout.com.

"My name is Rev. Tommie Lee Watkins Jr. I am an ordained Baptist minister and former Naval Academy midshipman who was a member — and president — of the class of 1998. In May 1997 I resigned under duress from the United States Naval Academy due to allegations by a fellow midshipman that I was homosexual. Because of the highly visible leadership positions I had acquired, I was told that if I voluntarily resigned, the Naval Academy would support a recommendation that I not be required to reimburse the government for the cost of my education.

I reluctantly submitted my "voluntary" resignation to the Naval Academy. I was surprised to find that they still wanted to require me to repay the $66,717 in tuition. I filed a petition with the Board of Corrections of Naval Records, and they determined that reimbursement was not warranted. However, the Navy overturned that decision.

The Navy has waived required reimbursement in cheating, drug, and sexual harassment cases, but they won’t in mine. I cannot help but assert that the Navy’s course of action in my case was an act of prejudice because I am an African-American who happens to be homosexual.

Because of the military’s blatantly prejudiced policy of "Don’t Ask, Don’t Tell, Don’t Pursue" that so unfairly empowers and provokes discrimination against certain individuals, the Navy is acting with an air of invincible arrogance in my case. The policy doesn’t work, and statistics show that the military is losing some of its best people because of it. The Pentagon needs to reexamine this policy, especially given the Rand report, which proves that allowing openly gay service members will not tear down unit cohesion. It is my conviction that prejudice will only be torn down if homosexuals are allowed to serve openly in the military. How can we sit in agreeable silence and allow people who have pledged their lives to defend our country to become victims of our own bigotry and prejudice? Whatever happened to "one nation under God, with liberty and justice for all"?"