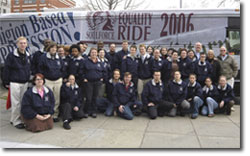 The Equality Ride is two months of sustained activism inspired by the Freedom Rides of the civil rights era. It is a journey by bus to initiate discussion about faith and sexuality in communities where it is most controversial. An unfortunate number of Christian colleges and universities blatantly condemn certain aspects of human diversity. In fact, in many schools, identifying as or affirming a lesbian, gay, bisexual, or transgender person is a violation of policy. Participants in the Equality Ride share a message of hope and healing with students suffering under such doctrinal prejudice. For seven weeks they travel to places to encourage compassionate inclusion and loving acceptance, values upon which Christianity is founded. Honest exchange around these topics, which belongs at academic institutions, creates a mutual learning experience that breeds genuine understanding.

The dialogue fostered during the Equality Ride, while scripturally focused, is very much about faith itself. This nation’s history is punctuated by hateful acts of violence and pandemic oppression. However, there is a reciprocal legacy of truth seekers and peace keepers. Accordingly, the theme of the Ride this year calls for progressive faith that recognizes the inherent dignity and worth of every individual. Discrimination against lesbian, gay, bisexual, and transgender people is deeply rooted in the false notion that they are sick and sinful for living their truth. This defamatory rhetoric is demoralizing and destructive, and far too often begets spiritual death and even suicide. Soulforce is determined to illuminate this reality and, in effect, champion those impacted by harmful ideology.

Homophobia is globally pervasive, and no community or school escapes its reach. The route has less to do with specific priority and everything to do with the urgency of this conversation. In 2006, during the inaugural Equality Ride, participants engaged nineteen schools. This year, the journey continues with fifty-seven young adults going to thirty-two Christian colleges and universities. Two buses are taking the group on two distinct paths around the country in creative pursuit of social justice. In doing so, they are empowered to change countless lives. Love liberates the oppressed, redeems the lost, and resurrects the spirit.