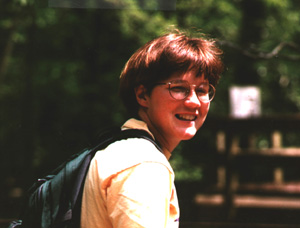 I am 33 years old and a wildlife biologist. While many gay folks have endured physical violence as a result of lies told about homosexuals, for me the violence was internal. I live a comfortable life now, after years of struggle over being gay. Now I attend a gay-friendly church where I am free to grow spiritually and to be myself. Years ago, I could not walk into a church without crying. Now everyone knows I am gay, but for 6 years, starting at age 18, I was painfully in love, and could not bring myself to tell even her. Deep down I must have believed the untrue negative things often told about gay folks or I would not have waited so long to deal with my orientation.

When I finally began to recognize my sexuality as a gift, I vowed that I would life my life openly and courageously in a way that would help change things for myself and for other gay folks. While in graduate school at Louisiana State University, I was active in their gay and lesbian student associations. We did service projects for the wider community, educational seminars for classes and dorms, and organized social activities. I was openly gay at churches I attended, and led discussions about homosexuality there. These activities, as well as simply living my life normally but openly, changed some people’s minds, but more importantly changed me.

Living honestly sometimes meant difficulties. Some students and faculty objected to my openness. Now I am a camp counselor for a week every summer, and have begun teaching Sunday school, but at some churches there were folks who questioned whether I should teach children, and a few who objected to my presence altogether. The stereotypes that we somehow hurt children and are out to destroy families are particularly painful. (I am a godmother to my niece, and lived with and took care of my 91-year-old grandmother for a while.)

Overall, though, I have gotten much support, often from heterosexuals (including my parents) who overcame their initial puzzlement and fear. So why go to Lynchburg? The day after the Lynchburg weekend, I fly to Baton Rouge to defend my Ph.D. dissertation. Potentially the weekend is a distraction, but recognizing and dealing with one’s homosexual orientation is also a great distraction, and one I had through much of graduate school. The world presses us with many concerns – feeding the hungry, protecting the environment, working for racial and economic justice, building stable communities.

We gay people have many gifts to offer toward meeting these needs, but our gifts are often rejected outright, or thwarted because we are busy dealing with the untruths about homosexuality that have been heaped on us. It is worse for others than for me. One dear friend of mine is deeply closeted because he feels he cannot pursue the career he loves and be openly gay. He is great at what he does (see, I can’t even say what that is) but I fear he will never let himself love fully.

Another friend told me about the suicide of a friend whose father tormented him over being gay, bolstered by religious views that said gays are sick and sinful.

How does one deal with the intense anger that comes from learning such things? There have been times when I have wanted to put my fist through a wall, but I came to recognize that carrying that anger would destroy my soul. I couldn’t live like that. I have also learned that striving to love and forgive opens up a place where enemies can become friends. So I am coming not only for the sake of myself and for other gay folks, but for those who have been refusing our gifts. I believe the world, Jerry and his followers included, can ill afford to prevent people from loving themselves, others and God fully. I am coming to Lynchburg for all of us.