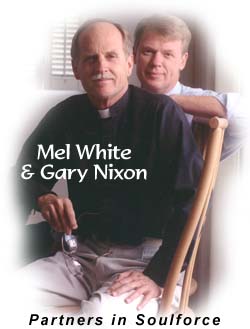 In 1997, in Atlanta, Georgia, the Rev. Dr. Mel White was awarded the ACLU’s National Civil Liberties Award for his efforts to apply the "soul force" principles of Gandhi and King to the struggle for justice for LGBTQ people. Mel’s best-selling autobiography, Stranger at the Gate: To Be Gay And Christian In America, has inspired thousands of people. His 2006 book, Religion Gone Bad, provides sobering detail to the strategies behind the religious right’s campaign of misinformation against LGBTQ people.

Mel and Gary met and fell in love at All Saints Episcopal Church where Mel served on the vestry and Gary sang baritone in the Coventry Choir. Gary was a property manager for the Weyerhaeuser Corporation, in charge of corporate properties across Southern California. In 1993, Gary and Mel began their activism and have worked together full time since then.

On Pride Sunday, June 27, 1993, Mel White was installed Dean of the Cathedral of Hope Metropolitan Community Church in Dallas, Texas, with 10,000 congregants, the nation’s largest gay-lesbian congregation. After almost 3 decades of counseling and "anti-gay" therapy including prayer, fasting, exorcism, and electric shock, Mel White was able to reconcile his Christian theology and his sexual orientation. At his installation, Mel proclaimed his own, heart-felt statement of faith: "I am gay. I am proud. And God loves me without reservation."

In the months that followed, Mel’s story was featured in the L.A.Times, the Washington Post, and in media across the nation. He was interviewed on hundreds of radio and TV broadcasts including Larry King Live, National Public Radio and the BBC. In 1994, Mel, his partner, Gary Nixon, and his former wife, Lyla, were featured on Sixty-Minutes.

In April, 1994, with the publication of his autobiography, Mel comes out of the closet to give hope to others, to confront the misleading anti-gay rhetoric of the radical right, and to launch his own fight for justice and understanding for lesbian, gay, bisexual, transgender, and queer people. 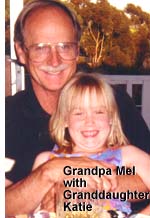 On January 1, 1995, Dr. White was appointed national Minister of Justice (an unsalaried position) for the Universal Fellowship of Metropolitan Community Churches, the only Christian denomination with a primary outreach to gays and lesbians. The Reverend Elder Troy Perry, founder of the U.F.M.C.C., and its Board of Elders, asked Dr. White to represent the denomination’s 300 churches in the current nationwide struggle on behalf of justice for all who suffer, gay and non-gay alike. In the summer of 1996, UFMCC moved into their newly acquired world headquarters in West Hollywood, California. To be closer to their families (especially Mel’s grand daughter, Katie), and to UFMCC leadership, Mel and Gary sold their home in Texas and moved back to southern California.

On September 1, 1996, Mel and Gary began a two week Fast for Justice on the steps of the United States Senate, inviting people of faith across America to join in this prayer vigil that God would change the minds and hearts of Senators about to pass the so-called "Defense of Marriage Act." Passing DOMA would be the first time in U.S. history that the entire lesbian-gay community would be singled out as second-class-citizens, denied by law the 1,047 rights and protections that go automatically with heterosexual marriage. 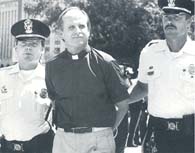 When the Senate passed DOMA (85-14), White moved his Fast for Justice to the White House steps where he, his partner, Gary, and 7 others were arrested while praying on the White House sidewalk. Dr. White asked his critics, "How can we stand by in silent acceptance while the President and the Congress sacrifice lesbian and gay Americans for some ‘greater political good.’"

While completing his B.A. degree at Warner Pacific College (1962) and his M.A. degree in communications at the University of Portland (1963), Mel produced and hosted a weekly NBC television series, "The World of Youth" (1959-1966). 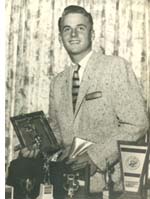 While working on his Ph.D. in communications and film at U.S.C., Mel won a Rockefeller grant to begin a doctorate in religious studies as well. Mel completed his doctorate at Fuller Theological Seminary in Pasadena, California, where he also served for more than a decade as a professor of communications and preaching. In 1973, Mel was appointed Senior pastor of Pasadena’s First Covenant Church.

In 1965 Mel founded Mel White Productions, Inc. and in the next 20 years produced 53 prize-winning motion picture and TV documentaries. Since 1972, Dr. White has also written 16 books, 9 of them best-sellers including David, the story of David Rothenberg, the child burned by his father (a 1988 NBC movie of the week with Bernadette Peters) and A Gift of Hope: The Tony Melendez Story, a July, 1989, HarperCollins release, condensed in the June, 1989, issue of Reader’s Digest.

White has served as consultant to major film studios including Warner Bros. ("The Mission") and Universal Studios ("Cry Freedom"). From the beginning of his career in media, Mel has searched for stories that would inspire and inform the struggle to be human. He directed documentary film crews in Vietnam during the last years of the war, documenting the spiritual dimensions of that conflict on its victims.

Mel has produced and directed television specials in Africa, Asia, South and Central America His book, Margaret of Molokai, is the story of the last leper to leave the Kalaupapa peninsula and a fascinating analogy for the current AIDS crisis. Mel’s Aquino (Word Books, 1989) is the biography of Ninoy and Cory Aquino, the martyr and the president, and the amazing spiritual story of the People’s Revolution in the Philippines.

Dr. White has dedicated his life to Justice for LGBTQ people.

For interviews or information: