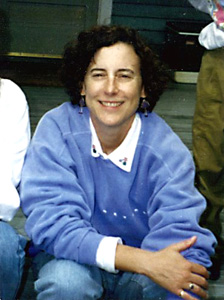 Once upon a time, I was told that God loved me "no matter what." It changed my life. My resolve to support sexual minorities in the church grew out of my own dependence on the grace and love of God – and has been strengthened by having witnessed the pain that God’s children go through when someone tells them they are not lovable. I have prayed and read and reflected and asked myself over and over, "How would Jesus respond to these ones?" I am convinced that God loves them as God loves me – no matter what!

As a campus minister, I have had the opportunity to walk with students whose self-esteem is dangerously low because they have heard words of rejection from the church. I have wept with students whose parents rejected them when they came out. I have rejoiced with the community when I presided at union ceremonies. I have been hurt by those who claim that I am "not a Christian" because I believe that God calls us into loving, faithful, committed relationships – regardless of gender. As one who has been healed by the power of God’s unconditional love, I am committed to declaring that love to all of God’s children – and find myself quite mystified by those who see the need to "protect" God from loving the "wrong" people.