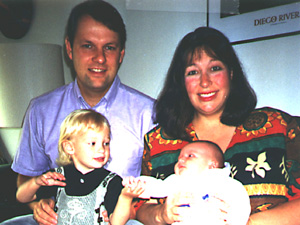 I am a heterosexual, married Baptist Minister and father of two young children. I grew up in suburban Cleveland, Ohio, a town known for its diversity and tolerance. But I was still a victim of my class and upbringing. Like most children, I grew up telling and laughing at gay jokes, poking fun at any male who seemed effeminate. But when I began taking Christ seriously, I saw his call for love, justice and hope as being in direct opposition to my anti-gay culture.

I graduated from Union Theological Seminary in New York, where roughly one third of the seminary community was gay or lesbian. As I pursued my ordination process, I was denied ordination twice because I refused to say that homosexuality is a sin. I could not live with integrity as a minister if I forsook some of my sisters and brothers. After finally being ordained (o my third try), I began to serve as a Pastor. That was 10 years ago. I have been Pastor of Dolores Street Baptist Church, San Francisco’s only Welcoming and Affirming Baptist Church for the past five years.

I am going to Lynchburg because I have been convinced and convicted that the hate speech much stop. I have read a number of Rev. Falwell’s writings and have heart many statements by him which continue to spread untruths about our gay and lesbian sisters and brothers. Sadly people find in those words justification for their own violence against gays and lesbians. Most gay members of my church have been the victims of gay-bashing at one time or another. This language is killing people.

On a more personal note, I am a brother of a lesbian sister and I would not dream of encouraging her to change her orientation. It is part of who she is and I see her orientation is a gift from God. Further, if either of my two daughters should realize that they were lesbian, I hope and pray they would live in a church and a society that embraced them without judgment, fear or violence.