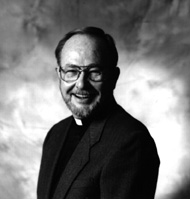 I am a pastor with 25 years experience ministering in and to the lesbian and gay community. I have pastored Metropolitan Community Churches in Chicago, Los Angeles, and now, Austin, Texas. I have been in a deeply committed relationship with one man for the last 25 years. Before that, I was married for 10 years and am a father and very proud grandfather! My former wife, CJ Taylor, will also be in Lynchburg.

Why Go To Lynchburg?
My Journey to Lynchburg began a long time ago. Perhaps it was 25 years ago, when a distraught young man named Ramon stumbled into my office. Through his tears he told me he had gone to his pastor for help understanding his attraction to other males. Instead of keeping that information confidential, his pastor announced it to the entire congregation the following Sunday morning. Ramon and his family were told to leave the church and never return. That afternoon, in an uncontrolled rage, his father attempted to shoot Ramon. Instead, he shot andkilled Ramon’s three-year-old sister. In the past quarter century, I have witnessed countless examples of the suffering and pain that the misinformed words and actions of religious leaders have caused in the lives of gay and lesbian people and their families. My whole life has been given trying to replace that misinformation with understanding. Lynchburg in another step on that journey.