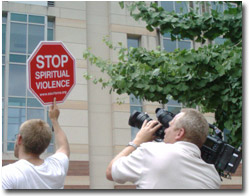 HELP US SPREAD THE TRUTH!

RESOURCES TO PREPARE FOR THE SBC ACTION

What Professionals say about homosexuality (pdf)

Soulforce Case Against the Southern Baptists (2003)

Rightly Dividing the Word of Truth: A resource for Congregations in Dialogue about Homosexuality