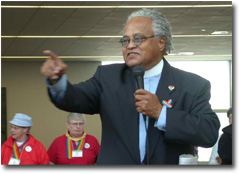 Join Soulforce at the United Methodist General Conference in Pittsburgh, PA for a Soulforce Training and Action from Wednesday, May 5 through Saturday noon, May 8th

SOULFORCE PRESS RELEASE ON ACTION AT GENERAL CONFERENCE – May 6, 2004

INVITATION TO JOIN US IN PITTSBURGH

The United Methodist Church is the third largest Christian denomination in the United States with over 9 million members. For 32 years United Methodists have studied and debated the issue of homosexuality.

Although from the beginning of this debate United Methodists have represented a progressive religious voice for the human and civil equality for gay, lesbian, bisexual, and transgender (GLBT) persons in our nation, that voice has been steadily weakened by the spiritual discrimination against GLBT persons which has grown within the church as forces of the Religious Right have gradually become more powerful.

Now the rights and human dignity of GLBT citizens of the United States are under assault by those who would use the proposed anti-gay and anti-family Federal Marriage Amendment to codify discrimination against GLBT individuals, couples, and families, into the U.S. Constitution. Will United Methodists now remain silent while GLBT people become victims of election year politics?

The General Conference of the United Methodist Church meets every four years (during Presidential election years) to legislate law and policy for the denomination. The Conference lasts ten days (April 27 through May 7), but Soulforce will be targeting the last three days (May 5-7) of the Conference for its major training and action with a closing session on Saturday morning, May 8. Soulforce’s objective will be to remind General Conference delegates of the United Methodist tradition of support for civil equality and justice for ALL people, specifically gay, lesbian, bisexual, and transgender persons.

If General Conference continues to support GLBT equality and civil rights, we will celebrate with them. If General Conference acts instead to further marginalize GLBT persons, or chooses to remain silent while our civil equality and basic civil rights are threatened, we will not be silent. We will use the teachings and methods of Gandhi and King to call our United Methodist brothers and sisters back to the truth that GLBT people, as children of God with all other human beings, deserve nothing less than full equality in church and society.

* Soulforce will be present for the entire event, which lasts from April 27-May 7. If you can join us prior to May 5th, please put a note in the notes section of the registration form letting us know when you will be arriving in Pittsburgh.