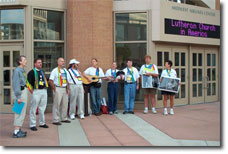 SCHEDULE DETAILS – Times and additional information about vigils and leafletting

SOULFORCE PRESS RELEASE July 29,2003 – ELCA Youth Commended for their Stand on Homosexuality, Encouraged to Join in Vigils at Churchwide Assembly

ARCHIVES AND PHOTOS FROM ELCA ACTION IN INDIANAPOLIS – 2001

HOTEL ACCOMMODATIONS There is no official "Soulforce Hotel", as we will be utilizing whatever space is available. But we have reserved a block of rooms just in case.