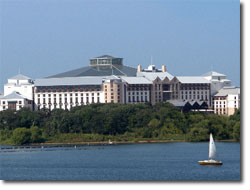 The Council for Christian Colleges and Universities represent 120 Christian schools across the nation. Most CCCU schools have policies discriminating against gay, lesbian, bisexual and transgender people. Since the beginning of the Soulforce Equality Ride, the President of the CCCU, Dr. Robert Andringa, has worked with Soulforce to see that the ride is a good learning experience for all involved. In an email to Jacob Reitan, co-director of the Equality Ride, Dr. Andringa stated, "We share some hopes even though neither I nor our presidents are going to embrace some of your ultimate goals. But we can agree that the ride should advance education, civil dialogue, learning to respect differences, and making safe places for students exploring their own sexual identities."

On March 30 – April 1, the CCCU is holding their international conference at the Gaylord Resort in Dallas, TX. This year’s theme is "Significant Conversations." The members of the Soulforce Equality Ride look forward having just such conversations with numerous CCCU administrators from around the country and the globe.

The Soulforce Equality Ride will hold a rally to talk about discrimination in higher education outside the Gaylord hotel at 11:00 a.m. on March 31.

If you are a resident of the Dallas area, you are encouraged to come out to take part in this important stand for equality. Sign up below.

Register to take part in the Soulforce Equality Ride rally at the CCCU conference on March 31.

At the intersection of Fairway Drive and Gaylord Trail in Grapevine, TX

Map this location by clicking here.