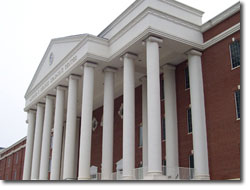 Sign up for the Direct Action at Liberty University on March 10, 2006.

The Rev. Dr. Jerry Falwell is nationally known for his anti-gay advocacy and comments. Liberty University students are taught to take his perspective as truth. They are denied the opportunity to hear in their classrooms a reasoned argument that disagrees with the belief that homosexuality is a sickness and a sin.

College should be place of academic freedom, a time to question prior beliefs and above all else, a time for free expression. But for students at Liberty University, college does not come with that freedom. This is especially true for GLBT students who must remain closeted, living in fear of others finding out their secret.

You are invited to take a day off of school or work to take a stand for equality at Liberty University in Lynchburg, Virginia.

Participants in the direct action will meet at First Christian Church in Lynchburg Virginia at 9 a.m. on March 10. A rally at Liberty University will take place at 10:30 a.m.

Also consider joining the Equality Riders at the Sending Service to be held at First Christian Church on Thursday, March 9th at 7:30pm.

This is will be the second time the Soulforce Equality Ride has stopped at Liberty University. Last April, young adults from all across Virginia came together to spend a day at Liberty and bring a message of equality to a school that teaches intolerance.

This year the Soulforce Equality Ride will return. We have planned more events to increase the reach of our message.