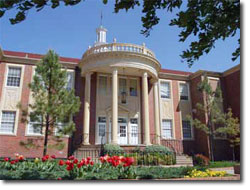 Oklahoma Baptist University used to have one of nation’s most anti-gay policies. Their 2004-2005 policy banned not only the enrollment of gay and lesbian students but also the enrollment of straight allies. That changed this year with the adoption of a new policy. No longer are straight allies banned from attending OBU, but GLBT people remain unable to attend openly. Over the years may students have been kicked out of Oklahoma Baptist because of their sexual orientation.

Soulforce’s former Executive Director Karen Weldin is a graduate of OBU and currently is the co-chair of OBU Pride, an organization representing GLBT alumni of OBU.

Sadly, Oklahoma Baptist University has refused to work with the members of the Soulforce Equality Ride in creating a mutually agreed upon schedule of activities for our visit to the school.

Despite OBU’s reluctance, the Soulforce Equality Riders remain undeterred and have planned two days of presentations, speeches and compelling activities during their time at OBU.

Register to help with the Equality Ride’s stop at Oklahoma Baptist University.