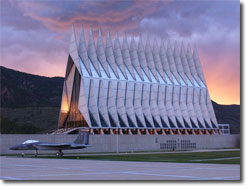 The full name of the military policy that effectively bans homosexuals is "Don’t Ask, Don’t Tell, Don’t Harass, Don’t Pursue." Homosexuality is grounds for dismissal. They attempt to draw a fine line between practice and orientation, but in reality the division is nonexistent.

That is the number of soldiers who were kicked out of the army in the first ten years of the policy because they are gay, lesbian, or bisexual, and the discrimination continues.

Those 10,000 lost their careers and sometimes were forced to pay back what the government had invested in their education.

While we have not been allowed to create scheduled forums with students and administrators at the U.S. Air Force Academy, we have been welcomed onto campus like any other citizen. We will attempt to have genuine discussions about the reality of Don’t Ask, Don’t Tell.

If you would like to support us during our visit in Colorado Springs on April 14th, please sign up to offer your help. We will have an opportunity for you to communicate to congress your demand to lift the ban on GLBT enlistment.

Register to stand with the Soulforce Equality Ride at the U.S. Air Force Academy.

Read about the U.S. Air Force Academy and GLBT equality.

A letter from a cadet in a Military Service Academy