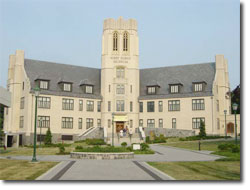 We may come on for a "guided bus tour," but nothing more. Dialogue, discussion, and intellectual engagement of contemporary issues – these things are not allowable, even though U.S. Military Academy at West Point is also an institution of higher learning.

We do still seek open communication with the students, faculty, administration, but the Academy has effectively put an end to correspondence.

We invite former military members who were kicked out because of their sexual orientation, soldiers who did not elect to re-enlist and live a lie to serve, and concerned citizens in the New York area to stand with us on April 26th in West Point.

Make your voice heard. Tell the government that they are sanctioning discrimination by preventing gay, lesbian, bisexual, and transgender persons from serving their country.

The rally takes place at Thayer Gate at 11am on Wednesday, April 26th. Buses will leave from New York City at 9am for the rally. Directions are available for those who will drive or take mass transit.

For a map of the New York and West Point region, click here.

Register to stand with the Souforce Equality Ride’s at West Point.

We will keep you updated via email with further instructions.

Also, on Tuesday, April 25th at 6:30pm there will be an "End of Journey" gathering and fundraiser at the New York Lesbian, Gay, Bisexual, and Transgender Community Center. Click here to read more and to RSVP.

A letter from a cadet in a Military Service Academy.