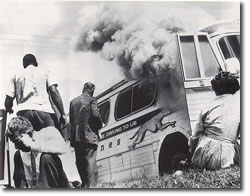 Click here to read a letter from Rodney Powell, a gay man who helped lead the Freedom Rides.

On Monday, May 4, 1961 brave young men and women boarded a Greyhound bus with a ticket south. The ride was designed to test the Supreme Court’s 1946 decision in the Irene Morgan case, which declared segregated seating of interstate passengers unconstitutional. From beginning to end the young adults who were made up of both white and black individuals planned on breaking whatever unconstitutional rules of segregation were still being enforced at interstate bus stations. White youth would sit in the back of the bus and use black waiting areas and black youth would sit in front of the bus and use white waiting areas. It was an experiment in courage. Their goals were freedom and reconciliation and their weapons were truth and love.

On their journey to justice, these Freedom Riders met horrible violence. In Alabama the groups went in two directions and both groups faced hostile situations. The first group met an angry mob in Anniston, Alabama, and their bus was fire bombed. The second group met a similarly angry mob in Birmingham, Alabama. For a moment it seemed as though the Freedom Rides had come to an end because the bus company did not want to continue for fear of their drivers safety and the safety of their buses. But the Freedom Riders wanted to push ahead. As Jim Peck, a white young man who had fifty stitches from the beatings he received, insisted, "I think it is particularly important at this time when it has become national news that we continue and show that nonviolence can prevail over violence."

With the help of students from Nashville, famous for their Nashville sit-ins, and pressure from Attorney General Robert Kennedy, the Freedom Ride continued. The next stop was Montgomery where they were met with violence for a third time. After this occurrence Robert Kennedy called in Federal Marshals to ensure their protection. Kennedy had hoped for a cooling off period but the Freedom Riders wanted no such thing. With the protection of the Federal Government they continued onto Jackson, Mississippi. They were given good protection as they entered the Jackson bus terminal and there was no angry mob waiting for them there. However, local police were waiting and the students who broke the local laws mandating segregation were hauled off to jail where they were at the mercy of the local courts, which sentence the riders to 60 days in jail.

As the members of the Equality Ride embark on their journey next March, they draw inspiration from these youth who fought for their freedom over forty years ago. Certainly, the two journeys are different in many ways. They have different purposes and goals. They are fighting different forms of oppression and each present their own unique challenges to overcome.

If you are considering applying to be an Equality Rider, please take some time to read about these brave young adults. Also, read the letter from Dr. Rodney N. Powell, who was a black (and closeted gay) student activist in the African American civil rights movement while in medical school in Nashville, Tennessee 1957-1961. Draw inspiration from his words and the history the Freedom Riders made working for equality and justice.