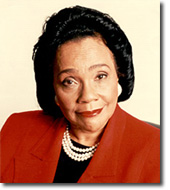 "I still hear people say that I should not be talking about the rights of lesbian and gay people and I should stick to the issue of racial justice… But I hasten to remind them that Martin Luther King, Jr., said, ‘Injustice anywhere is a threat to justice everywhere’ … I appeal to everyone who believes in Martin Luther King, Jr.’s dream to make room at the table of brotherhood and sisterhood for lesbian and gay people."1

"Gay and lesbian people have families, and their families should have legal protection, whether by marriage or civil union. A constitutional amendment banning same-sex marriages is a form of gay bashing, and it would do nothing at all to protect traditional marriages."2

"We are all tied together in a single garment of destiny… I can never be what I ought to be until you are allowed to be what you ought to be," she said, quoting from her husband. "I’ve always felt that homophobic attitudes and policies were unjust and unworthy of a free society and must be opposed by all Americans who believe in democracy."3

"Gays and lesbians stood up for civil rights in Montgomery, Selma, in Albany, Georgia, and St. Augustine, Florida, and many other campaigns of the Civil Rights Movement. Many of these courageous men and women were fighting for my freedom at a time when they could find few voices for their own, and I salute their contributions."4

"We have to launch a campaign against homophobia in the black community."6

"Homophobia is like racism and anti-Semitism and other forms of bigotry in that it seeks to dehumanize a large group of people, to deny their humanity, their dignity and personhood. This sets the stage for further repression and violence that spread all too easily to victimize the next minority group."7

Coretta Scott King was the wife of Dr. Martin Luther King, Jr. and a leader in the civil rights movement.

7 Coretta Scott King, a speech at the Palmer Hilton Hotel, quoted in the Chicago Defender, April 1, 1998 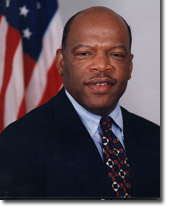 From time to time, America comes to a crossroads. With confusion and controversy, it’s hard to spot that moment. We need cool heads, warm hearts, and America’s core principles to cleanse away the distractions.

We are now at such a crossroads over same-sex couples’ freedom to marry. It is time to say forthrightly that the government’s exclusion of our gay and lesbian brothers and sisters from civil marriage officially degrades them and their families. It denies them the basic human right to marry the person they love. It denies them numerous legal protections for their families.

Some say let’s choose another route and give gay folks some legal rights but call it something other than marriage. We have been down that road before in this country. Separate is not equal. The rights to liberty and happiness belong to each of us and on the same terms, without regard to either skin color or sexual orientation.

Some say they are uncomfortable with the thought of gays and lesbians marrying. But our rights as Americans do not depend on the approval of others. Our rights depend on us being Americans.

Sometimes it takes courts to remind us of these basic principles. In 1948, when I was 8 years old, 30 states had bans on interracial marriage, courts had upheld the bans many times, and 90 percent of the public disapproved of those marriages, saying they were against the definition of marriage, against God’s law. But that year, the California Supreme Court became the first court in America to strike down such a ban. Thank goodness some court finally had the courage to say that equal means equal, and others rightly followed, including the US Supreme Court 19 years later.

Some stand on the ground of religion, either demonizing gay people or suggesting that civil marriage is beyond the Constitution. But religious rites and civil rights are two separate entities. What’s at stake here is legal marriage, not the freedom of every religion to decide on its own religious views and ceremonies.

I remember the words of John Kennedy when his presidential candidacy was challenged because of his faith: "I believe in an America that is officially neither Catholic, Protestant, nor Jewish — where no public official either requests or accepts instructions on public policy from the pope, the National Council of Churches, or any other ecclesiastical source — where no religious body seeks to impose its will directly or indirectly upon the general populace or the public acts of its officials — and where religious liberty is so indivisible that an act against one church is treated as an act against all."

Those words ring particularly true today. We hurt our fellow citizens and our community when we deny gay people civil marriage and its protections and responsibilities. Rather than divide and discriminate, let us come together and create one nation. We are all one people. We all live in the American house. We are all the American family. Let us recognize that the gay people living in our house share the same hopes, troubles, and dreams. It’s time we treated them as equals, as family.

John Lewis was a young leader of the Civil Rights Movement. He was 23 years old when he spoke at the 1963 March on Washington. 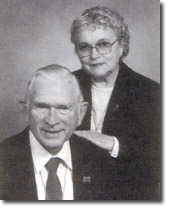 "We are a retired Lutheran pastor and spouse, whose oldest son was born gay, and who at the age of 37 died with AIDS. Having spent years coming to grips with and trying to understand the concept of homosexuality, we have ultimately come to recognize this condition as a special gift of God conveyed to some of his carefully selected daughters and sons. We have come to know personally thousands of gay, lesbian, bisexual and transgendered persons. And we have also become convinced that this condition is part of the ‘creative given’ rather than a personal choice by those individuals."

"We have spent most of our lives struggling against the oppression of African-Americans and other groups within our society who are the objects of discrimination and prejudice. And we consider our ministry with and for the GLBT community to be an extension of that life-long commitment."

Rev. Bob Graetz and his wife Jeannie in a letter to Catholic Bishop Daniel Pilarczyk. Bob Graetz was the only white minister to march with Martin Luther King Jr. during the Montgomery Bus Boycott. He and his wife Jeannie served an all-black Lutheran congregation in Montgomery, Alabama in 1955. Because of their participation in the boycott, their home was bombed twice. 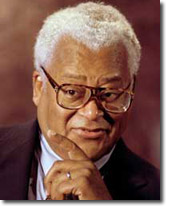 "Gays and lesbians have a more difficult time than we did. We had our families and our churches on our side. All too often, they have neither."

Rev. Dr. James Lawson is a distinguished United Methodist pastor who worked side-by-side with Dr. King training the young people who staged the lunch counter sit-ins and the Freedom Rides. 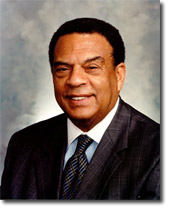 Andrew Young speaking about a United Church of Christ resolution affirming same-gender marriage equality. Young, a close friend of Dr. King during the civil rights movement, is a former U.S. ambassador to the United Nations and mayor of Atlanta. 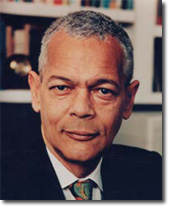 "That’s why when I am asked, ‘Are gay rights civil rights?’ my answer is always, ‘Of course they are.’"

"Rights for gays and lesbians are not ‘special rights’ in any way. It isn’t "special" to be free from discrimination — that’s an ordinary, universal entitlement of citizenship."

"No parallels between movements for rights is exact. African-Americans are the only Americans who were enslaved for more than two centuries, and people of color carry the badge of who we are on our faces. But we are far from the only people suffering discrimination — sadly, so do many others. They deserve the law’s protection and they deserve civil rights too. Sexual disposition parallels race — I was born black and I had no choice. I couldn’t and wouldn’t change if I could. Like race, our sexuality isn’t a preference — it is immutable, unchangeable, and the Constitution protects us against prejudices based on immutable differences."

Julian Bond speaking at the 2008 Creating Change Conference. Bond was a founding member of SNCC in 1960. While a student at Morehouse College in Atlanta, he helped organize a sit-in movement at Atlanta University. Since 1998, Julian Bond has served as Chairman of the Board of the NAACP. 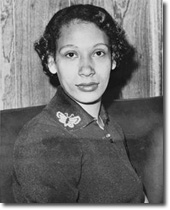 "Surrounded as I am now by wonderful children and grandchildren, not a day goes by that I don’t think of Richard and our love, our right to marry, and how much it meant to me to have that freedom to marry the person precious to me, even if others thought he was the ‘wrong kind of person’ for me to marry. I believe all Americans, no matter their race, no matter their sex, no matter their sexual orientation, should have that same freedom to marry. Government has no business imposing some people’s religious beliefs over others. Especially if it denies people’s civil rights.

I am still not a political person, but I am proud that Richard’s and my name is on a court case that can help reinforce the love, the commitment, the fairness, and the family that so many people, black or white, young or old, gay or straight seek in life. I support the freedom to marry for all. That’s what Loving, and loving, are all about."

Mildred Loving, along with her husband, Richard, were plantiffs in the historic Supreme Court decision "Loving v. Virginia" which overturned state laws preventing two persons of different races from getting married.

Source: Loving for All by Mildred Loving, June 12, 2007 (the 40th anniversary of Loving v. Virginia). Available from Freedom to Marry as a pdf.