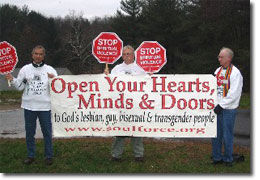 Jury selection and morning worship took place inside the camp gymnasium, while we stood in the pouring rain and high winds singing songs of hope and prayer. The wind and rain seemed to symbolize the gloomy situation in the United Methodist church, which seeks to punish gay, lesbian, bisexual, and transgender people who tell the truth about who they are.

Prior to jury selection, any juror who said theyfelt that they could not "uphold the order and discipline of the Church" was dismissed from the pool. Therefore, the only people who were even in the jury pool were those who agreed to uphold the Church’s unjust law.

Beth’s supporters in Soulforce and the other organizations went into the gymnasium for the trial to support her. The trial was scheduled to begin at 1:30pm, however, due to the high winds, several trees brought down power lines and cut off electricity to the camp. As several people jokingly commented that "this could be God’s sign that the trial shouldn’t go on," generators were brought in to run the microphones.

Charges were read that Beth is being charged with "violating 2702 1b of the Book of Discipline by engaging in a practice declared by the United Methodist Church to be incompatible with Christian teaching." She entered a plea of "not guilty."

Bishop Peter Weaver took the stand for the prosecution, and although he affirmed the "call" of Beth to the Church, he stated several times that there were three other options which he discussed with Beth, which were: 1) celibacy, 2) work in ministry as a lay person, or 3) transfer to another denomination.

Beth also took the stand, and described her passionate call to ministry. When one of the jurors asked why she pleaded not guilty, she stated that she had not violated the Sacred Trust of her call to ministry and was afaithful minister of the United Methodist Church.

The prosecution rested its case at 4:30pm. The trial will begin again on Thursday, December 2 at 8:30am. The trial is expected to be over some time early Thursday. A verdict of "guilty" is expected.