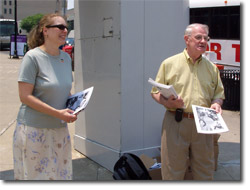 On Tuesday, June 22, six volunteers with Soulforce worked to distribute over 500 pro-gay Bible studies outside the Gaylord Entertainment Center in Nashville. We arrived at 7:30am and worked until 2:00pm, handing out the booklets and talking with Southern Baptists attending the annual meeting of the SBC. We were interviewed by all four local Nashville TV stations and several newspapers reported on our actions.

On the previous night, the local GLBT community in Nashville organized a "Faithful Witness" where approximately 100 people turned out to march around the Gaylord Entertainment Center seven times while holding candles and singing.

More About the Action in Nashville:

Christian Youth: An Important Voice in the Present Struggle for Gay Rights in America

What the Bible Says – And Doesn’t Say – About Homosexuality