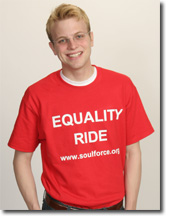 I am the Director of the Equality Ride, a nationwide movement of young adults seeking to bring understanding about gay, lesbian, bisexual and transgender (GLBT) issues to institutions of higher learning, which ban the enrollment of openly GLBT people.

The damaging effects of "Don’t Ask, Don’t Tell" are many. First and foremost, the morale of the GLBT servicemember is severely affected, as the ban demands self-denial on top of the already substantial sacrifices expected of uniformed personnel and their families. 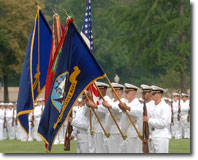 Secondly, the readiness of our nation’s military is impaired as a result of "Don’t Ask, Don’t Tell." Since the adoption of "Don’t Ask, Don’t Tell," over 10,000 qualified servicemembers have been discharged from the military. At a time when many military recruitment offices are missing their recruiting goals, we must ask ourselves what the value is in discharging thousands of qualified men and women who are seeking to serve our nation. In fact, a new study by the Servicemembers Legal Defense Network, suggestions that as many as 41,000 GLBT people would be willing to serve if the "Don’t, Ask, Don’t Tell" ban were lifted.

As a gay man, who myself has thought about joining the J.A.G. program, I ask why my desire to serve is rejected?

As the Superintendent of the Naval Academy, I hope that you will take the time and seriously consider the harm "Don’t Ask, Don’t Tell" has on your institution.

I am, of course, aware that you have no independent ability to change how the "Don’t Ask, Don’t Tell" policy is enforced at the Naval Academy. I understand that such a change can come only from an act of Congress and/or a ruling of the Federal Courts.

At the same time, however, I am also aware that the opinions of men and women like you hold a great deal of weight in the halls of Congress and the chambers of our courts. Your words help our elected and appointed officials decide how they will act when choosing whether to lift the ban created by "Don’t Ask, Don’t Tell." Indeed, it is in large part because of the opinions of men and women like you that the compromise of "Don’t Ask, Don’t Tell" came into being in the first place.

For this reason, I want to request a meeting with you to discuss the harmful effects of "Don’t Ask, Don’t Tell." I would like to hear your opinion on the matter and share with you the understanding I have come to have on this issue.

I hope you will seriously consider my request. I look forward to hearing from you.