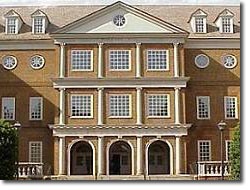 (Virginia Beach, VA) Despite previously having agreed to a day of dialogue with the Soulforce Equality Riders, Pat Robertson’s Regent University has now rescinded their invitation to dialogue about GLBT discrimination. The University has stated that the activists’ presence on campus will constitute trespassing.

Regent University is the second stop for this group of young adults on a two-month journey to Christian colleges and military academies that ban GLBT enrollment. This comes after 24 people, some Equality Riders and other supporters from nearby colleges, were arrested at Liberty University and later released without bond on March 10.

“We had remained optimistic that forums for genuine dialogue would emerge with Regent University, despite nearly six weeks of unreturned phone calls and emails,” says Equality Rider Chad Grandy, the point person for Regent.

On February 21, the webpage on the Equality Ride site was updated to reflect the nature of that continuing dialogue, stating: Regent University has refused dialogue thus far with the Equality Ride, but the riders are undeterred in their hope for dialogue with the school. On February 22, the riders received a positive response from the University with a proposed schedule for the two days on campus, but the website was not changed to reflect that.

As of March 7, Regent is closed to dialogue and access, citing two issues. The first issue is the continued presence of the phrase on the Equality Ride website, "…Regent University has refused dialogue…but the riders are undeterred." Regent did not request that this statement change prior to fully recanting on the schedule.

The second issue is the riders’ statement that Regent has a policy banning GLBT students. Pannell writes in the withdrawal letter, "In spite of the fact that the Soulforce Equality Ride is aware that we have no such policies, the facts continue to be misstated." The Equality Ride, however, maintains that Regent does have a stated policy in the student handbook that bans homosexuals. It reads as follows: "…homosexual conduct or any other conduct, which violates Biblical standards, is prohibited."

Equality Ride Co-Director Haven Herrin responds to Regent’s position. “For nearly a year, Regent University has told the Equality Ride that the school has no ban on GLBT enrollment, but it does. Also, we wish the school would have approached us about the statement on the website. The swiftness with which they rescinded the welcome to dialogue makes us question the sincerity of their initial offer.”

The riders will hold a vigil at 10:30 at the Centerville Turnpike entrance to Regent University. They will seek to go on campus in order to dialogue with students.

Read about Regent University at www.equalityride.com/regent.

Soulforce’s purpose is freedom for lesbian, gay, bisexual, and transgender people from religious and political oppression through the practice of relentless nonviolent resistance. For more information go to www.equalityride.com or www.soulforce.org.