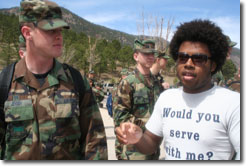 1993 was not a good year for LGBT equality. President Clinton signed into law a policy that effectively bans gay, lesbian, and bisexual service in the military. Clinton approved Don’t Ask, Don’t Tell (DADT) which purported to be the compromise that promised two things while appeasing the conservative opposition to openly gay service: first, that the safety of gay servicemembers would be better protected and, second, the law gave gays a means to dodging the traditional discrimination in order to enlist.

It is a bad compromise because the message is clear: you can be gay in the military…only until someone finds out that you are gay in the military. DADT lacks intellectual integrity. The architect of the policy, Professor Charles Moskos of Northwestern University, still stands behind this law that claims that being gay is not a bar to service, only grounds for dismissal.

Discrimination and oppression are inherent to DADT. A gay soldier must lie and hide his or her true identity on a daily basis. Gay servicemembers who live openly and share information about their spouses, significant others, or dating life risk investigation and involuntary expulsion. Under DADT, any statement that one is gay — to anyone, at any time, before or after enlistment — can be reason for investigation and discharge. Your life is a constant liability to your career when you are gay in the military.

DADT Does Not Fulfill its Promises to the Soldiers who Serve in Silence.

There is a lack of protection for gay soldiers because harassment cannot be openly discussed. Reporting a verbal or physical threat that involves references to sexual orientation can spark an investigation that leads to discharge. And the threats are real. The Pentagon’s own research confirms gay servicemembers’ reports of hostility. In March 2000, the Department of Defense released the results of a random survey of 71,570 active-duty solidiers. The survey found:

– Eighty percent of respondents stated that they had heard offensive speech, derogatory names, jokes, or remarks about gay men and lesbians during the previous year, and 85 percent believed such comments were tolerated to some extent.

– Thirty-seven percent reported that they had witnessed or experienced an incident that they considered anti-gay harassment.

Instead of creating a loophole for gay, lesbian and bisexual service, Don’t Ask, Don’t Tell has actually made discharges for homosexuality increase. During most of the 1990s, dismissals far exceeded the annual rates of gay-related discharges that existed prior to DADT’s implementation. In 2001 alone, a record 1,256 were discharged, a figure nearly double the homosexual separation rate of 730 in 1992, the last year before DADT. Thus far, more than 11,000 servicemembers have been dismissed under the policy according to the General Accounting Office for the military.

The Rationale for Don’t Ask, Don’t Tell has no Basis in Truth

The chief reason given for imposing silence on gay soldiers is the idea that openly gay and lesbian servicemembers would undermine military readiness, unit cohesion and morale. This theory has been debunked. The British, Canadian, German, Australian, Israeli militaries and others have allowed for openly gay soldiers to enlist, and it happened without fanfare or damage to their capacity.

American soldiers have been serving with openly gay soldiers for years. They work with coalition forces in Iraq and Afghanistan, and they work closely with openly gay security workers within the Central Intelligence Agency (CIA), Federal Bureau of Investigation (FBI) and National Security Agency (NSA).

Don’t Ask, Don’t Tell comes at a great cost to the American taxpayers. A 2006 Blue Ribbon Commission Report sponsored by the University of California estimated the figure to be at least $363 million.

Among the 11,000+ servicemembers discharged under DADT were more than 800 personnel with skills critical to national security. According to a 2005 Government Accountability Office report, those dismissed include at least 55 Arabic speakers, 9 Farsi speakers, and over 244 doctors, nurses, and medical specialists.

*****
Over 65,000 LGBT soldiers are serving today, according to a report from the Urban Institute. The institute also reports that there are 1 million LGBT veterans in the U.S. today. That is a lot of people who answered the call to duty and made unconscionable sacrifices beyond those of their heterosexial peers in the armed forces.

Nationwide polls have consistently shown that 79% of the American public supports lifting the ban on open military service. Indeed, it appears that the problem is not so much active opposition to open service as is political inertia that resists change and a lack of passion about this issue.