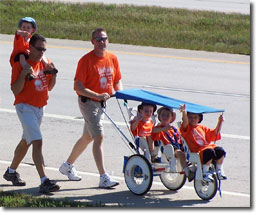 Our family decided to make the journey to Colorado Springs for the 2006 Soulforce march. My partner and I and our four children started out on our leg of the march early July 19, 2006. As we marched along the 4.8 mile segment we had the opportunity to talk about why we were there and what the march meant to each of us.

When you have three-year-old triplets and a six-year-old, you find that the days leave little time for anything but taking care of the children. We embrace that responsibility and strive to ensure our children receive everything they need. As a Christian with deep Lutheran roots from my early childhood who has at many times relied on faith, I know the importance of giving my kids a firm foundation in love, both mine and God’s.

As we finished our march and rode on the bus as others marched, we had the opportunity to meet and converse with people from a variety of backgrounds. Some of the people were not used to the volume of energy that three-year-old triplets have, but they were gracious, patient, and kind.

We traveled to Wal-Mart on Friday afternoon to stock up on supplies and as I and the six year old were in the store, my partner Jamieson was confronted as he emptied the mini-van of "kid trash." A man who was getting people to sign a petition for "one man, one women = marriage" verbally attacked my partner as he recognized his HRC t-shirt. When Jamieson tried to explain to a black women that was working at another table that the same bigotry was part of her history she just smiled and smugly told him that "I love you honey even if you are queer!" A Jewish women and her young son walked by during this discussion and the son said, "Gays are not going to inherit God’s kingdom they are going to the fire!" His mother and grandmother started clapping and said, "That is right baby." The girl at the table laughed and said "Amen!" As Jamieson tried to reason with her, recalling that Hitler not only targeted the Jews but also homosexuals, she became enraged at such a notion. Fearing for the safety of our triplets, Jamieson retreated. He called Jeff Lutes and, fortunately, Jeff was able to provide a calm voice of reason.

As I returned to the car Jamieson was visibly shaken and, as he told me the story, we both sat in utter disbelief. Neither I nor my partner had ever experienced such unbridled hatred in the name of religion. We made a promise to each other right there that because these people were allowed to be there by Wal-Mart we would never patronize them again.

On Saturday as we assembled for the last two-mile walk to Focus on the Family, we were again surrounded by amazing Christians united together in spirit. As we marched from Rampart Park my family was approached by a man named Sam. Sam was an "evangelical Christian" who had questions and for some reason decided to pick me. So for the next 45 minutes I proceeded to engage with Sam in a wide variety of subjects all relating to his misinformation about gay people, their families, and the "gay agenda." I have read a great deal of information on the bible and what it says about homosexuality, gay parenting, gay marriage, and the information compiled by Soulforce. I remained calm and provided Sam with answers, questions, scriptures, and personal experiences. None of the information that Sam had about gay people and the "gay agenda" was true. After Sam left, the group in front of us engaged us in conversation about Sam and expressed there joy in the manner in which I engaged Sam.

As the evening wound down I found myself carrying our six-year-old back to the hotel via the restaurant P.F.Chang’s because he was hungry. As we sat there waiting for our take out in our matching Soulforce orange shirts, I noticed two people from the march with their shirts in hand and not on, and other "family" who probably didn’t know anything about the Soulforce concert just up the hill.

As I carried my six-year-old on my shoulders back to the hotel with our Chinese food in tow I became angry. Angry because I thought living my life in the open was enough, angry at the complacency of the gay community, angry because there were only 4 families with children in the march, and angry that my God and my faith was being hijacked by Dr. Dobson and people like him.

But as I walked I was reminded by my son why we walked. As we marched earlier that week he asked us, "Dad, why are we marching?" Jamieson told him, "So you can love anyone you choose." But as I asked him again that night why did we march, his response was, "We marched so I can love everyone"

And there it was!

Or in the words on my six year old, "You shall love everyone." 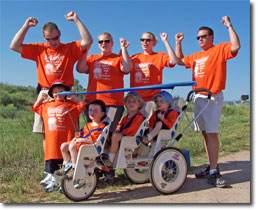 My family and I send a huge thank you to all the Soulforce people who helped give us a life changing experience. I don’t know how you do it day after day but I am glad you do. Our experience has caused us to make the following pledge:

We will do everything we can to make sure our children grow up in a world where they can love everyone! We take a pledge to do something each and every day to further the Soulforce cause until we meet in Colorado next year.