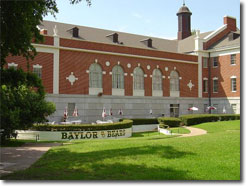 The Equality Ride stop at Baylor University is March 19, 2007.

The Equality Riders organizing the stop at Baylor University are Amanda Harris and Amy Scott.

Hello to all who supported the Soulforce Equality Ride for out stop at Baylor University and in the Waco community!

We just wanted to give you an update about what took place during our visit. We arrived at Baylor University on Monday, March 19 not sure what to expect. At this point, Baylor University had ended all conversation with the Equality Ride, letting us know that we were uninvited guests and that we would be treated as such. We did not know if this meant arrest, or that we would be allowed on campus provided we abide by the visitor guidelines.

We pulled up in our bus beside the campus bookstore surprised at the lack of police and security. We met with students and then walked to the chapel as a group to attend the service that morning. During the service, the guest speaker welcomed us as "honored guests," a surprise to all. We spent the rest of the day talking with students in the cafeteria and outside in high traffic areas. Earlier that morning, students received an email from VP for Student Life, Dub Oliver. The letter explained our visit:

"The Equality Ride organizers contacted the university administration, asking what our response would be should they select Baylor as a tour stop. The university responded that Baylor would not grant their requests for university-approved dialogue. While we respect their right to hold their views, we also ask that they respect our right as a private institution to hold views based on our mission as a Christian university in the historic Baptist tradition."

Dr. Oliver further explained that Baylor was comfortable having conversations on human sexuality, and students had many opportunities for such discussions. We asked several students if this was true, and the answer was a resounding no. We were happy to provide a forum for open dialogue since the conversation was seemingly stagnant and one-sided on campus. We had meaningful conversations that day and invited students to attend a community rally in downtown Waco later in the afternoon.

Many students participated at the rally, and we had an organic and beautiful conversation on how to create and sustain a Gay-Straight Alliance at Baylor and in the larger Waco community. Community members and students helped create a "Board of Trustees" poster with names and contact info for people who are safe spaces in the community. They also helped create a community billboard with personal stories of affirmation, which was later presented to the local Metropolitan Community Church.

That night, we held a community potluck at the PFLAG building in Waco. PFLAG and MCC members sponsored the potluck, and the food was delicious! At least 30 students were in attendance along with at least 30 more community members, and we had a great time talking with many LGBTQA students about their experiences on campus.

The next day, several Equality Riders attended a chapel service at the seminary, and others visited with students at a local coffee house. That afternoon, we held a brief meeting on campus to explain civil disobedience and to donate a Gay-Straight Alliance starter kit to interested students. Several students came forward and accepted the box, which included literature, a starter kit manual, several books, and an American/Rainbow flag in remembrance of the former underground LGBTQA group on campus, Baylor Freedom. We then explained the importance of nonviolence and our reasoning for seeking direct action on the Baylor University campus.

A large group of students and riders proceeded to walk in silent, single line formation towards Waco Hall, where chapel is held. Amanda Harris, co-organizer of the stop, announced the purpose of our direct action on the steps. Chalking at Baylor is done by all student organizations in order to make other students aware of their group meetings and events. Organizations are allowed to do this if the school sponsors them, but Baylor Freedom had a history of attempting to chalk its meeting information on campus only to have the chalk washed away at the request of Baylor administration. Our direct action was an act of remembrance of this organization and one of hope for change on campus. Students and riders alike chalked the stories, experiences, verses, and words of the silenced LGBTQA students on campus. They continued for about 10 minutes until a police officer in plain clothes arrived and demanded the action stop. While some desisted, 5 equality riders and 1 student continued because of their commitment to the Baylor LGBTQA community and to giving a voice to the silenced.

Those who were arrested remained in jail for 26 hours unable to see the magistrate who did not return until the next day. The remainder of the Equality Riders continued on to Mississippi the next morning because of pressing engagements, and many students came to see them off and offer their help. Several riders stayed behind to drive the arrestees back to the group and make sure that the student arrested would be alright returning to school.

Though our visit was eventful and overwhelming at times, we feel it was incredibly powerful. Students have told us of the underground LGBTQA group that has started meeting and chalking the information for their meetings inside of large orange Q’s on the sidewalks around campus. While there has been fear in the Waco area for LGBTQA individuals, a catalyzing has occurred, and a renewing of strength and hope since our visit. We look forward to continuing in the friendships that were formed with Waco community members and students and walking beside them as they continue to challenge the pervasive homophobic atmosphere present at Baylor University and in the larger Waco community.