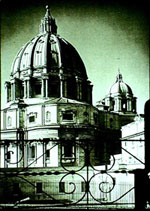 The following is a statement to which we are asking individuals and groups to sign on in support. It reflects the spirit and demands of the original letter sent to Archbishop Celestino Migliore, the Vatican’s Permanent Observer to the United Nations. If you would like to add your or your organization’s name to the list of supporters, or if you have questions, please contact Haven Herrin at Haven@Soulforce.org.

We are reaching out to many individuals and organizations to build solidarity in continuing to call for change from the Roman Catholic Church. At the appropriate time, we will make the list of supporters publicly known. Please let us know if you have any concern regarding the public use of your name.

With the recent announcement, that the U.S. will now sign on to the UN Statement on Human Rights, Sexual Orientation and Gender Identity, we urgently invite the Vatican to do the same.

We continue to be deeply concerned regarding the Vatican’s lack of support of lesbian, gay, bisexual and transgender people.

First, we call on Archbishop Migliore to work openly and diligently to move the Roman Catholic Church towards endorsing the United Nations Declaration on Sexual Orientation and Gender Identity.

Second, we call on Archbishop Migliore to take a personal stand against defamatory and hurtful language from leaders in the Roman Catholic Church that harms lesbian, gay, bisexual, and transgender people.

It is our hope that the Roman Catholic Church will speak, stand, and act for justice and safety for all human beings.