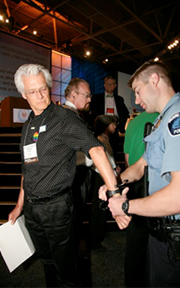 About 20 protesters from a group called Soulforce disrupted the plenary of the 219th General Assembly tonight (July 9), and some were arrested by the Minneapolis Police Department.

A group of protesters entered the plenary hall shortly before 5 p.m., and silently moved as a group to the front of the plenary hall, carrying signs protesting the policies of the Presbyterian Church (U.S.A.) regarding ordination standards; Christian marriage and same-gender unions; and pension benefits.

Cynthia Bolbach, moderator of the assembly, immediately called a recess. She said during a news conference later that she didn’t know whether any of the protesters were Presbyterian, but said "I think they’re angry because this discussion (on ordination standards) has been going on in the church for quite a long time." Bolbach said one protestor told her she was a former Presbyterian who had left the church; some were gays or lesbians, or have children who are gay and lesbian.

Read the full article at The Presbyterian Outlook