Thank you all for your commitment and prayers for our work on the United Nations task force on decriminalization in Uganda. With your help, Bishop Christopher from Uganda was able to complete his seven week tour of the USA and Ireland. You can follow some of the more detailed reaction to his visit on the Integrity Blog "Summer Pilgrimage with Bishop Christopher" www.walkingwithintegrity.org.

As a result of your generosity, Integrity USA collected $32,000 and agreed upon a budget to sustain the bishop’s courageous work among some of the most marginalized people of Uganda. Inspired by his favorite saint, the Bishop has renamed his Center "The St. Paul’s Center for Reconciliation and Equality". Now, we are focused on technical assistance to those on the ground in Uganda and sustainability of the work there. You can designate a gift for this work by writing "United Nations" in the note field on our Donate to Soulforce page. We are joined by the Human Rights Campaign, GLAAD and other leading justice organizations in supporting this work.

We have achieved a great first step and, it is important to understand that the Center and Bishop’s Christopher’s work is only funded through March 2011, so this second and third stages are critical to sustaining the work in Uganda and creating a potential model LGBT and allied progressive network for the region.

Please find attached an update from the Executive Director of Soulforce, Dr. Cindi Love. An update is published each month to the board of directors of Soulforce and will be presented three times each year to our supporters.  We hope you will take time to read all about the activities of the last four months–the PC USA action, the National Organization for Marriage (NOM) action, Rev. Janie Spahr’s trial and Mel’s and Bill’s participation there, our work with the United Nations decriminalization project in Uganda and more.  We are deep into the launch of our work with Affirmation in October in San Francisco and our new Symposium in Philadelphia for November 2010, formerly known as the ex-gay survivors’s conference.  We’ve never needed your active support more than today, so please contact me if you have any questions.

PS if you have trouble with the attachment, you can access the report here (pdf).

Sacramento – The California State Senate today passed a resolution (SR 51) condemning Uganda’s bill criminalizing lesbian, gay, bisexual and transgender people in 21-14 vote. Introduced by Senator Mark Leno (D-San Francisco) and sponsored by Equality California, the resolution urges the U.S. government to intensify its efforts to eliminate the criminalization of homosexuality worldwide as well as to take more caution when funding faith-based organizations to ensure that U.S. government funds and resources are accessible to women, minorities, and the LGBT community.

"The U.S. government must do everything in its power to stop the bill before the Uganda legislature that would lead to the criminalization and even death of lesbian, gay, bisexual and transgender Ugandans," said Geoff Kors, executive director of Equality California. "The California Senate has taken an important step in passing this resolution, which will help raise awareness of the crisis in Uganda and will put the state on record in support of the U.S. government strengthening its efforts to end the criminalization of LGBT people worldwide."

The resolution also encourages faith-based organizations in the U.S. to support the creation of policies in other countries that do not discriminate on the basis of sexual orientation or gender identity.

"It is egregious that radical religious leaders from our nation are working to spread fears about and discriminate against lesbian, gay, bisexual and transgender people in Uganda," said Sen. Leno. "These deplorable actions have encouraged violence, and even death against Ugandans.  This resolution is a simple human rights appeal urging President Obama and our federal leaders to call for the decriminalization of LGBT people, not only in Uganda, but across the globe."
Finally, the legislation commends Reverend Christopher Senyonjo, retired Anglican Bishop of West Uganda, for his work and ministry to create an inclusive church and society in Uganda free from discrimination based on sexual orientation and gender identity. In the last year, Reverend Senyonjo has toured California, the United States and Europe to educate and bring attention to the hostility of the recent wave of religious-based homophobia in Uganda.

To find out more information about EQCA’s legislation, visit http://www.eqca.org/legislation.

The National Board of Directors and national staff of More Light Presbyterians stand in solidarity and prayer with Rev. Janie Spahr and her faithful support for marriage equality and pastoral care.  The inspired and loving ministry of our beloved friend and colleague in ministry, Rev. Janie Spahr, is so much a faithful witness to a loving and just Church and society for all of God’s people that she has been charged once again for being a responsible and caring pastor by officiating at legal marriages of same gender loving couples.  "We rejoice in the faithful pastoral ministry of Janie Spahr.  There is no prohibition against same-sex marriage in Scripture or the Book of Order.  God created all of us for love and companionship, not just some of us," Rev. Janet Edwards, Co-Moderator.

"The growing support for marriage equality within the USA and around the world reveal a remarkable shift in the recognition of same-sex love and relationships.  Love is not restricted by gender any more than it is by race, ethnicity or religion.  One needs only look around to recognize the changing face of relationships within our families, congregations and world.  Love makes a family," Michael J. Adee, Executive Director & Field Organizer.

We call all Presbyterians to join us in celebrating Love and praying for Janie and her trial on August 24 at Covenant Presbyterian Church, Napa, CA.  "Please join us in praying for the commission of Redwoods Presbytery.  We celebrate the love and commitment of the same-sex couples who will testify at the trial.  It is our hope and prayer that the conscience and the call to pastoral care for Presbyterian ministers will be recognized and honored in the decision of this commission.  In addition to Janie’s ministry being on trial, so is marriage equality and pastoral care.  We are grateful for Janie and all Presbyterian ministers who follow their heart, conscience and call to ministry by caring for same-sex couples and their families, too.  Together we are building a Church for all God’s people," Trice Gibbons, Co-Moderator.

The US 9th Circuit Court of Appeals issued a stay on Judge Walker’s ruling which declared California’s Proposition 8 unconstitutional. Marriages, which were expected to resume this week, are on hold until the appeal decisoin. The court, however, demanded Prop 8 supporters to supply evidence as to why their appeal should even be heard and not simply thrown out. SF Gate has more details.

Courage Campaign is collecting 1 million signatures in support of marriage equality. Add your name to the list and send the video to your friends & family to let them know that equality matters.

BREAKING NEWS: Soulforce is pleased to join in celebrations of Judge Walker’s announcement that marriages between same gender couples may resume starting August 18, 2010. We believe in full equality for LGBTQ in all aspects of society and will continue to work to resist religious & political oppression, changing hearts and minds, as the case is appealed to higher courts. Be sure to read Rev. Gil Caldwell’s recent blog post "Prayers & Support for the resumption of same gender marriages in California".

Yahoo! News has more information from the Associate Press

Recently, Soulforce executive director Rev. Dr. Cindi Love urged people everywhere to stand up to the hate and lies of the National Organization for Marriage (NOM) and meet them with nonviolence at NOM’s stops around the country.

While Soulforce is unable to organize an "official" action, our strength lies in our committed grassroots networks of concerned people around the country. We are calling on you to stand up to NOM. View the list of stops for NOM’s "Summer of Marriage" tour, review Soulforce’s core values & pledge to nonviolence, put together a group or meet others on location, and take justice to the streets.

We’ve put together a one-sheet poster you can print on standard computer paper or have printed on a tshirt. Download your poster here (also available as a PDF). 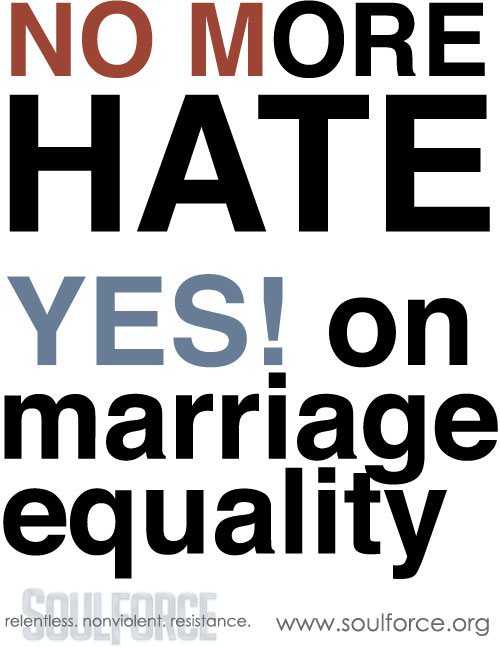 California was given a "do over" as the decision in Perry v. Schwarzenegger was handed down, today, August 4 (www.hrc.org). There are major implications for all of uswithin the LGBTQ & A community which we will address more thoroughly in a later alert. This notice is to help everyone understand what has happened in the past and what happened today. We want to acknowledge Chris Geidner, Washington, D.C. for his excellent comments regarding the context for today’s decision contained herein.

Read the full comments (and discuss them) on our blog.