Never before has a delegation of lesbian, gay, bisexual, transgendered people and our allies held a demonstration inside St. Peter’s Square. In fact, never in recent decades has there been any kind of demonstration in this amazing place. The Vatican has an ancient corcordat with Rome to prevent any kind of protest from taking place within site of the Holy See.

Our vigil coincided with two other major events happening today at St. Peter’s: 1) The Epiphany, which celebrates the Magi bringing their precious gifts to the Christ child and 2) The end of the Catholic Church’s Jubilee Year, which had as its theme: Open Wide the Doors.

On the three days leading up to the Epiphany, our Soulforce and Dignity /USA delegation came to the barrier outside St. Peter’s Square wearing shirts that read GOD’S GAY CHILDREN BRING GIFTS: BLESS THEM.

On the first day, we brought gifts for orphans. No one came to bless them, so after a prayerful vigil, we delivered them to a home for children living apart from their parents,

On the second day, we brought gifts for people living with HIV/AIDS. No one came to bless them, so after a prayerful vigil, we delivered them to an HIV/AIDS wing of a local hospital.

On the third day, we brought gifts for abused women in a battered women’s shelter. No one came to bless them, so after a prayerful vigil, we delivered them to the shelter.

Today, the Feast of the Epiphany, the Pope solemnly closed the Jubilee Door to St. Peter’s which will not be opened again for another 25 years. And, today when we came bearing the gifts of ourselves, the door was also closed once again to God’s gay, lesbian, bisexual and transgendered children..

We made but one request: that we be allowed to peacefully approach the large Nativity scene in the Square and leave our own pictures. This ritual was designed to symbolize the many gifts that sexual and gender minorities around the world bring to our families, to our neighbors, to our communities, to our countries and to our churches.

Instead of allowing us to proceed to the Nativity Scene with our gifts, we were surrounded by police and prevented from performing a simple act which thousands of others around were being allowed to do. How were we different? The only difference was that we wore shirts which proudly identified us as God’s gay, lesbian, bisexual and transgendered children. We repeated our simple request many times as we stood and sat in prayerful vigil for almost three hours within yards of the giant Nativity scene. As we gathered in communion, we told our stories and sang our songs. Many in the crowd of other pilgrims around us listened as our stories were translated into Italian. Many onlookers eventually also joined us in our circle of prayer after hearing why we were there to vigil. 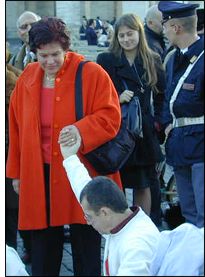 After waiting for nearly three hours to offer our gifts to the Christ child at the Nativity scene and being refused, Soulforce announced a campaign to encourage Catholics, as well as Christians of other denominations, to withhold contributions of money, talents and service to Churches whose teachings and practices cause spiritual violence and promote legal discrimination against lesbian, gay, bisexual and transgender people. Instead, Soulforce encourages people of faith who want to end the suffering to give their money, talents and service to ministries and organizations that help the poor, the sick, and the victims of injustice. By withholding contributions, lesbian, gay, bisexual, transgender people and their allies will no longer be complicit in the spiritual violence being waged against them by their own churches. Check this webpage often for information on how you can participate in this campaign.