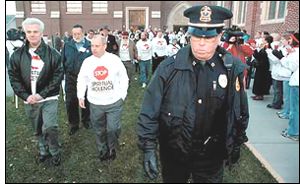 Seventy-four people were arrested Wednesday morning for blocking access to a church where the Rev. Jimmy Creech was to go on trial for marrying two gay men.

The protesters were arrested for trespassing outside Trinity United Methodist Church in Grand Island. Those arrested by police had locked arms and blocked the entrance to the church as Bishop Joel Martinez of Lincoln and potential jurors arrived.

The people arrested were primarily members of Soulforce, a group supporting Creech. They were taken to a makeshift police headquarters in the former Walnut Junior High building, where they were given citations and each paid a $48 fine.

Opponents of Creech also appeared outside the church early Wednesday. 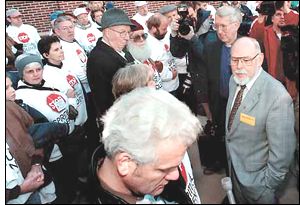 While protesting the trial of the Rev. Jimmy Creech, members of Soulforce block the entrance to Trinity United Methodist Church in Grand Island Wednesday morning. The group members refused to move when (from right) United Methodist Bishop Joel Martinez and Bishop William Boyd Grove asked to enter the church. Grove is presiding at the trial.

Members of the Westboro Baptist Church of Topeka, Kan., held signs in protest of homosexuality and same-sex marriage. Their leader, the Rev. Fred Phelps, left the scene shortly after 9 a.m. Wednesday, saying there were other protests they needed to attend.

The church trial started at 10 a.m. after a short jury selection process. Creech told supporters outside the church that he did not participate in jury selection, and he would not offer a defense. Offering a defense, he said, would give credibility to what he considers to be unjust and immoral church law.

Instead, Creech said, he would answer questions posed by the prosecution and give a final statement. He said he would ask jurors to give no ruling so that pastors don’t have to be punished for loving all of God’s sinners.

Jurors received the case and broke for lunch just before noon. Deliberations are scheduled to resume at 1:15 p.m.

For more on this story, link to the Grand Island Independent www.theindependent.com.