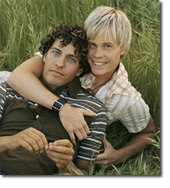 Jason has been touring for several years now in a full time solo ministry sharing the message of unconditional love and acceptance for all people. He has been singing since he was a child, and even as a child he was aware of God’s call on his life. From his roots in Evangelical Christian music ministry to the spiritual journey he has been on these past several years, these experiences have formed him into the man he is today. Jason toured with the professional Christian Contemporary recording group TRUTH in 1996, and after leaving Truth to finish his college career at Lee University, in Cleveland TN, he joined and toured with a group called THE SOUND in 1997 and 1998. After many detours and relocations, Jason felt called to Los Angeles in 2001, where he met deMarco.

Born of Italian-Canadian parents, deMarco’s passion for singing began at an early age when he would fill the house singing songs taught to him by Catholic nuns. He discovered a love for music and theater and studied both at a performing arts school, and later at York University. Since his relocation to the West Coast from Canada five years ago, deMarco has been making waves performing in concerts, festivals, and clubs in Los Angeles and across the country. He has been active in both the music and acting industries and his face has been seen on several commercials nationwide. After touring in Italy as the lead vocalist in a theatrical production during the summer of 2002, he returned to Los Angeles where he and Jason began planning their first tour together.

Jason and deMarco’s passion for their purpose and refreshing exuberance toward their craft create a high-impact music experience that will surely make a difference in the lives of all who experience it.

Soulforce is pleased to introduce them to Colorado Springs. We sincerely hope that Dr. James Dobson and his staff will join us for this inspirational time together. Jason and deMarco will be performing at the Soulforce Family Picnic & Rally. At 8pm that evening, they will be in concert at Pikes Peak MCC, 1102 S. 21st Street. For more information on Jason & deMarco, go to www.jasonanddemarco.com