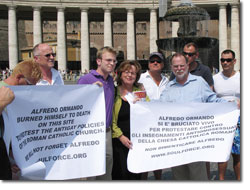 When Rev. Dr. Mel White and a small cadre of Soulforce volunteers boarded the cruise ship Brilliance of the Seas, it was for activism first and pleasure second. Where better to recruit potential activists than from the captive audience of two thousand gay male passengers?

Together the small Soulforce team created invitations to an act of nonviolent resistance, planned for when the ship would arrive in Italy. They hung an invitation on every cabin door in the huge ship and were delightfully surprised when more than thirty men stood vigil, with dozens of others in the crowd still too timid to join in.

When the group arrived in Rome, Sept. 2, 2005, they laid flowers and prayer cards near the obelisk in St. Peter’s Square, in memory of Alfredo Ormando, a 39-year-old Sicilian who burned himself to death to protest the anti-homosexual policies of the Roman Catholic Church" The group chanted, "We will not forget Ormando!"

It is reported that on January 13, 1998, Ormando slipped into St. Peter’s Square in Rome, removed a can of gasoline, doused himself, and lit himself on fire. He began walking in the direction of St. Peter’s Basilica "like a giant torch," as one witness put it. Two police officers intercepted Ormando as he reached the steps. They wrestled him to the ground and extinguished the flames, which by then had covered nine-tenths of his body with burns. He was taken to a nearby hospital where he lingered for 10 days before dying.

Media reported "Gay rights activists argued that Ormando’s choice of St. Peter’s Square was not an accident — he was, they asserted, bringing his problems back to their source. For some gay Christians, Ormando has become a martyr."

Soulforce volunteers held signs in English and in Italian beneath the window of Bendedict XVI, asking him to recognize Alfredo’s death and to end this holy war that the Vatican is waging against lesbians and gays around the world. The signs concluded with these words: WE MUST NOT FORGET ALFREDO. Tourists and pilgrims approached the vigil to ask questions. Some joined in the protest. A lesbian from Rome brought red carnations to honor Alfredo’s death.

After a press conference Soulforce placed the flowers where Alfredo died and bowed heads in silent prayer. At that moment, six Italian policemen arrived and with only a glance at our signs asked us to leave St Peters Square immediately or be arrested. We gathered up our flowers, our signs, and our memorial cards signed by friends in America and Italy and moved them just outside the Square where protests are legal.

The Associated Press, the National Catholic Reporter and other Italian and American journalists appeared to cover the story. And though all 2,000 men did not join SF in protest, they all had a chance to read about Alfredo’s death and about Soulforce and the commitment to do justice nonviolently.

Throughout the cruise volunteers were approached by people asking about Soulforce. Mel White concluded, "The experiment was a success in many ways especially since we know for certain that once again our lives and the lives of those who stood with us were changed forever".