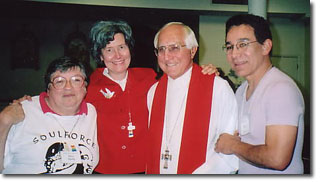 Many Soulforcees will remember the arrests that took place at the Hyatt Regency Hotel in Washington DC, after 3 faithful Catholics were denied Eucharist at the Bishops Mass in Nov. 2002. We were arrested and spent 30 hours in jail awaiting arraignment for trespassing at the Hyatt. Instead of just paying the fine as Soulforce has usually done in the past, we decided to take it to trial. Our trial was in January 2003 and we ran into all sorts of frustration when they postponed it for almost a week, and then when we returned we were told that there weren’t enough people for a jury.

The three of us almost decided to just plead guilty and go home – actually we did decide that, but one of our pro bono lawyers shared with us his vision of trial as liturgy. All 3 of us, hearing the analogy, were convinced that we should go ahead with the trial. Because the trial had been postponed, Bishop Gumbleton was able to testify in our behalf!

When it came time to sentence us, the judge apologized for “our” church – she too was Catholic and said that extreme violence had been done to us when we were denied Eucharist. She said it was clear that we were guilty, but that she was going to do something she’d never done in her 17 years as a judge – refuse to impose sentence on us. She even urged us to return to the Hyatt in November and help the bishops understand, but to do it legally the next time. She ended the trial saying, "Go in Peace."

It was a stunning moment for us. There was hardly a dry eye in the courtroom (save the prosecutors who were furious). Surely we would never have imagined this outcome in our wildest dreams. The story continued, but we didn’t find out until last July.

Partially as a result of the trial, Judge Mildred Edwards decided to retire and enter seminary. She ended up at Washington Theological Seminary and was in a class with an acquaintance of mine who ended up interning at my parish in California this summer. Charlie relayed to me that she told the story of our trial to the class. I asked him to carry back a letter when he returned to DC and we have been in communications with Judge Edwards ever since.

When we returned to DC again last November, I invited her to join us at the Peace Mass that Bishop Gumbleton was going to celebrate, which was co-sponsored by Soulforce, Pax Christi and Jonah House. Mickey (what Mildred Edwards prefers to be called now) came to the Peace Mass, and we took this photo. The photo got lost and was found 2 months later.

I wanted to share the photo and the story with you, because I’m so overwhelmed by the story. I would love to have this story made into a play, and am trying to find someone who might want to do it. It’s a most amazing story about the ripples we send out, yet usually never have the opportunity to know about it.