(Jackson, TN) — Today the Soulforce Q Equality Ride visited Union University in hopes of engaging students and faculty in dialogue about faith and fairness for lesbian, gay, bisexual, and transgender students. Upon their arrival, Equality Riders were informed by campus officials that they would be permitted to stay at Luther Hall, a building across the street from the main campus, as well as in a limited space at the south entrance of Union. Unfortunately, both of these areas were far removed from student activity and were not conducive to the open dialogue to which the Equality Ride is committed.

"We were placed in areas that severely limited our interaction with students. The goal of the Equality Ride is always to communicate with as many students as possible about faith and the safety of their lesbian, gay, bisexual, and transgender peers. Therefore, it was absolutely necessary for us to move onto campus and meet students where they are to have this valuable conversation," explains Katie Higgins, Equality Ride Co-director.

When Equality Riders, led by Rachel Watson, a Union graduate, attempted to move further onto campus towards the student center and other more populated areas of Union, they were turned away by police and campus security. "It was heartbreaking to have my Alma Mater turn me away from campus. I wanted to talk to students about my life and the pain I experienced as a lesbian on Union Univertsity’s campus, but instead I was locked out of my own school," Watson says.

Rachel Watson, along with the rest of the Equality Riders, stepped back as instructed by officers, but three Riders who were determined to reach students for discussion continued onto campus and were arrested. The Riders arrested were Zak Rittenhouse of Frankfort, OH; Manny Lampon of New York, NY; and Jarrett Lucas of Minneapolis, MN.

Since 2006, the Equality Ride has visited more than 50 schools, hosting public forums, participating in panel discussions, and taking part in worship services and Bible studies. The goal is to inspire further conversation and to empower students, faculty, and administrators to make their school welcoming to all students.

The organizers of the Equality Ride use a collaborative approach, writing to college administrators months in advance and inviting them to work together to design programming that examines diverse points of view — including points of view that affirm gay and transgender students.

JACKSON, Tenn. (AP) — Three people were arrested Monday while trying to speak to Union University students about equality for gay and transgender students.

Officials at the Christian-centered school instructed the equality riders to stay at a building across the street from the main campus and in a limited area at its south entrance Monday.

When demonstrators tried to move further into campus toward the student center, police turned them away.

Zak Rittenhouse, Manny Lampon and Jarrett Lucas continued into campus and were arrested and charged with criminal trespassing.

University officials said in a written statement the university gave the group an area in Luther Hall, a private donor offered meals and administrators encouraged faculty and students to "engage in informal discussions" with the group in the designated area.

"Although Union University cannot affirm this group’s message, the university leadership made an attempt to offer dialog and Christian hospitality to Equality Riders," the statement says. "It is regrettable that the leadership of Soulforce responded by rejecting these offers."

The group wrote in a news release it will return to campus Tuesday to further the discussion on equality for all regardless of sexual orientation.

The original article is available on the WTVC News Channel 9 website:
http://hosted.ap.org/dynamic/stories/T/TN_EQUALITY_RIDERS_TNOL-?SITE=WTVCTV&SECTION=HOME&TEMPLATE=DEFAULT 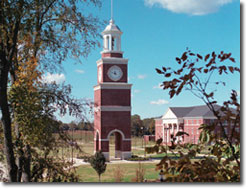 The Equality Rider organizing the stop at Union University is Rachel Watson.