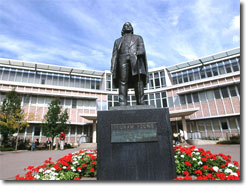 The Soulforce Equality Ride will hold a National Soulforce rally on April 10th to tell Brigham Young University that their anti-gay policies, based on Mormon beliefs, cause GLBT suffering.

Nearly always, the LDS Church and BYU are indistinguishable in theology and policy, but the university takes an especially punitive stance in the case of homosexuality. This school is one of perhaps four or five universities in the U.S. that expel gay, lesbian, bisexual and transgender students and those who advocate for gay rights!

"Advocacy of a homosexual lifestyle (whether implied or explicit) or any behaviors that indicate homosexual conduct, including those not sexual in nature, are inappropriate and violate the Honor Code. Violations of the Honor Code may result in actions up to and including separation from the University."

BYU administration has reportedly told the student body that the Soulforce Equality Ride will be allowed onto campus to speak with students. Communication between the school and the Soulforce Equality Ride has been stilted, but we look forward to the opportunity to dialogue with students, faculty and administration about the misuse of scripture to oppress GLBT persons. We are glad that our time in Provo can be a productive learning experience for everyone wherein we civilly discuss the reality of the GLBT discrimination and suffering.

There will also be a community meeting in Kiwanis Park to offer presentations, speeches, and music to the community. Sign up to join hundreds of us on April 10th. Take a stand for equality. Support personal safety and academic freedom for all students. Uphold the notion that we can learn from history and end religion-based oppression.

The community meeting will be held in Kiwanis Park in Provo, Utah on Monday, April 10. Music by Bronwen Beecher starts at 5pm. The program starts at 5:30. Speakers will include Rev. Robyn Murphy, Jennifer Nuttal of the GLBT Community Center of Utah, Carlie Hardy, and other current and former BYU students.

Register to take part in the Soulforce Equality Ride’s events at Brigham Young University on April 10.

Donate an Easter Lily plant to become part of a historic processional to BYU on April 11th.

A letter from a current student at BYU

A letter from a BYU alumnus.

Read the official stance of the Latter-Day Saints Church on homosexuality.