The "religious right" is not our enemy. Pat Robertson, Jerry Falwell, James Dobson, D.James Kennedy and the other religious leaders aren’t the source of our suffering. Gandhi and King remind us that our real enemy is untruth.

Those who believe (and even those who teach) the untruths about sexual orientation are victims, too. To understand the cause of our suffering is to understand theuntruths, half-truths, and misunderstandings that have victimized us all.

The untruth about homosexuality and homosexuals is ancient. In past centuries, our sisters and brothers had almost no evidence to support the truth that they were God’s children, too.

Now, there is plenty of biblical, scientific, psychiatric, psychological, medical and historic evidence that supports the American Psychological Association’s declaration that "it is as natural to be homosexual as it is to be left handed."

These sample untruths are collected from quotes in one letter (with enclosures) that was mailed in September, 19, 1998, by the Rev. D. James Kennedy and his associate, Janet Folger, to raise funds to support the "Truth in Love" campaign of their Coral Ridge Ministries. (You may remember their full page newspaper ads and TV commercials promoting the "EX-GAY" movement). 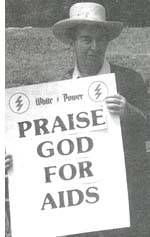 This list of untruths, half-truths, and hyperboles is not displayed to embarrass Dr. Kennedy, Janet Folger or the Coral Ridge staff. Their misinformation is typical of the common charges made by our adversaries. Unfortunately, these untruths lead directly to misunderstanding, confusion, suffering, and even death.

Believing that the tragic untruths are "supported by the Bible", there is a "holy-war" being waged against homosexuality and homosexuals by Fundamentalist Christian Leaders (with their own TV & radio networks, publishing houses and direct-mail campaigns), by clergy and laity in the historic Protestant Denominations; by the Mormons and the Jehovah’s Witnesses; and by cardinals, bishops, and priests of the Roman Catholic Church.

Although a few religious organizations accept homosexuals unconditionally, United Church of Christ and the Unitarians; and though individual clergy are taking personal risk to support our cause, Madison Affirmation and The Rev. Jimmy Creech and though more than 1,000 local congregations have become fully accepting "Welcoming Congregations"; the majority of fundamentalist and mainstream Protestant and Catholic leadership gives tacit support to this "holy war" against homosexuality and homosexuals.

The organized Christian religion has become the enemy of God’s lesbian, gay, bisexual, and transgendered children. Radio and TV evangelists seem obsessed with their anti-homosexual campaign. And many clergy and lay leaders who know the truth remain silent in the face of powerful fundamentalist factions working in their own denominations threatening to withhold personal and financial support if they openly support full membership, ordination, and marriage.

It is easy to aim our anger at the people who believe and who teach the untruth. But the principles of Soulforce remind us that there is a more effective way.

Step 2 on the journey to soulforce begins when we see our adversaries in a whole new way.

For Gandhi and King, to "love" our adversary means that we respond to our adversary guided exclusively by the principles of "ahimsa" or nonviolence. Gandhi said it this way. "No physical, verbal, or psychological violence." In King’s words, "No violence of the fist, the tongue, or the heart."

Before I discovered Soulforce, I felt a growing rage at these religious leaders "who should know better." But I worked as a ghost writer for many of them. I know my adversaries intimately. They are sincere, though sincerely wrong. And though they do use the untruths to raise money and mobilize volunteers, they do believe the untruths and are themselves victims of those same untruths.

How easy it is to demean and demonize our adversaries. How many times have we been tempted to hate them, to call them names, to wish them dead? How quickly our rallies and marches can deteriorate into name calling contests. How often our banners and posters reflect insult and rage. Soulforce calls us to a better way.

Before you can move on to Step 3, think seriously about signing this Soulforce Credo About My Adversary. Print it. Sign it. Cut out pictures of your favorite "enemies" and frame the Credo with their faces.

We will never win the minds and hearts of our adversaries until we learn to out-love them. Signing this Credo is an important step in that direction.

Once you have signed the Soulforce Credo about My Adversary, you are ready for:

Step 3: Help Those Who Suffer
Seeing Service in a Whole New Way