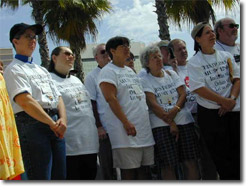 6/5/2000
Our Soulforce Commitment
There are rumors circulating about our Soulforce presence in Long Beach. We promise you this: We will not disrupt, anger, or embarrass the GA or the PCUSA in any way. Whatever you have heard, we will not block, impede or attempt to enter. We are committed to the principles of nonviolence (in thought, word, and deed) as taught by Jesus, Gandhi and King. A large percentage of our delegation is made up of Presbyterians or former-Presbyterians with long and loving ties to the PCUSA. We are all people of faith coming to Long Beach in search of reconciliation, not conflict.
Read more.