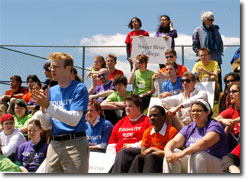 (Lynchburg, VA) The first ever Soulforce Equality Ride is set to begin in early March. During a 51-day bus tour, thirty-five young adults will confront nineteen religious colleges and military academies that ban the enrollment of lesbian, gay bisexual and transgender students. The main reason history is taught in any school is to learn from past mistakes and to avoid repeating them. But by practicing religion based discrimination, these institutions of higher learning are repeating past mistakes.

Washington, D.C. – The first ever Soulforce Equality Ride is set to embark in early March from Washington, D.C. During a 51-day bus tour, thirty-five young adults will confront nineteen religious colleges and military academies that ban the enrollment of lesbian, gay bisexual and transgender students.

"For centuries the Bible has been used to exclude and condemn. People of color, women, and those of other faiths have all been victims of Biblical misuse. Today is it gay and lesbian people who are the victims – ‘the other,’" said Jacob Reitan, Founder and Co-Director of the Soulforce Equality Ride. "We challenge the schools to learn from history, to take ownership of the damage caused by their policies, and to stop religion based discrimination."

There are nearly 200 schools that ban the enrollment of openly LGBT persons in the United States and some, like Colorado Christian University, also exclude straight allies. Students on these campuses are already responding to the Soulforce Equality Ride with excitement and gratitude:

"I don’t think that most of the Wheaton community has any idea how unsafe and unwelcome GLBT people feel here." -a closeted student at Wheaton College, IL

"They all say I am going to hell…I can’t help how I feel inside, but I have to hide it. Thanks for trying to let people know that we are just like them and we have a right to be on the same campus. God created us and loves us all!"
-a closeted student at Lee University, TN

Haven Herrin, Co-Director of the Soulforce Equality Ride, maintains the legitimacy of the Equality Ride’s presence at the schools. "We understand that many of these colleges are private institutions. We do not dispute the school’s right to disagree, make policy, or even arrest us when we visit, but we can and do question the moral underpinnings of their choices regarding communication, academic freedom, and discrimination."

Many schools on this journey are finding common ground with the riders. President George Brushaber of Bethel University in St. Paul, MN writes, "We are committed to working with you on the details of your visit to Bethel to make it a good learning opportunity for our students." President Bob Andringa of the Council for Christian Colleges and Universities, which represents fifteen of the schools on the route, has worked closely with Reitan and Reverend Dr. Mel White, President and Founder of Soulforce, to facilitate communication with the colleges.

Conversely, Liberty University, the first stop on the journey, has promised to arrest the riders upon their arrival. This school is not alone in its refusal. Reverend Jerry Falwell, Liberty’s Chancellor, has stated that he would rather see his school burn to the ground than accept the goals of the Equality Ride. It was less than 40 years ago that he took a similar stand in denying admission to his church to people of color. Falwell called the Civil Rights movement the ‘Civil Wrongs’ movement.

Rev. Dr. Mel White says of Falwell’s years of biblical misuse, "Reverend Falwell is abusing religion now just as he did in the past. Religion should be a source of compassion and love and support for fellow human beings."

Soulforce’s purpose is freedom for lesbian, gay, bisexual, and transgender people from religious and political oppression through the practice of relentless nonviolent resistance.

You can view materials for the press at www.equalityride.com/media

Soulforce’s purpose is freedom for lesbian, gay, bisexual, and transgender people from religious and political oppression through the practice of relentless nonviolent resistance. For more information go to www.equalityride.com orwww.soulforce.org.