LGBT activists from across the country will gather in Philadelphia on Friday, Nov. 5, to rally against homophobia in support of subjugated LGBT youth.
Soulforce, a non-profit that hopes to end political and religious oppression against LGBT people through nonviolent resistance, will sponsor the ‘Life Rally’ in Love Park. The event is part of a two-day initiative , which will include a symposium that is aimed at "debunk[ing] the myths that plague [the national conversation about homosexuality."

The Rev. Dr. Cindi Love, executive director of Soulforce, told EDGE the recent media attention surrounding LGBT teen suicides and Dan Savage’s It Gets Better Project offers an opportunity to end bullying once and for all.

"While we completely support the idea of It Gets Better, we also know that young people need tools that help them get better right now, not someday," said Love. "The only good news about the recent focus on teen suicide is that everyone now knows something has to be done. We hope that our symposium is a catalytic event in the lives of individuals and our community so that concrete steps are taken to better support and empower young people."

The idea for the rally came after Jason Connor, community director for Soulforce’s, came out to his family during their annual Equality Ride, a bus tour that addressed anti-LGBT legislation at college campuses across the country. Connor’s Mormon family consequently disowned him, spurring him to address the alarming number of LGBT suicides within the faith-based community.

"He found a way out for himself and wanted to create a safe and vibrant space where we could not only think about our losses but also think about the ways in which we can celebrate our lives," said Love about Connor. "It was his idea to create the rally and our cohort of Equality Riders in Philadelphia joined with him to bring the event into being."

Love works closely with religious traditions to establish safe spaces for LGBT youth and conduct workshops on inclusion even when the places of worship have no intention of changing their ideology. She is confident networking with faith-based organizations can bring reform providing comfort to LGBT youth at odds with their faith.

"Fundamentalist religious belief is at the root of patriarchy and, therefore, at the root of sexism, homophobia, heterosexism, misogyny and the exclusion of LGBTQ people from full citizenship in society and in the church," said Love. "People in the faith-based communities are in the best position to advocate for the elimination of polity and policies within denominations that are harmful to the lives of LGBTQ people. They speak the language of the oppressor while not having to choose to be the oppressor."

New Jersey lawmakers recently introduced an Anti-Bullying Bill of Rights that would create school safety teams and require annual reporting on bullying instances from school and district administrators. Furthermore, Garden State schools would be graded on how they handle bullying, harassment and intimidation.

While Love believes instances of bullying need to be addressed on an individual basis, she thinks the law will encourage some teens to stand up to their aggressors.

"I believe that we always need a law to enforce what is right when people don’t choose to do what is right in the absence of law," she said. "I also believe that the law is simply a tool to encourage people to think differently-perhaps to hesitate before they commit a crime of bullying. We only stop cruelty and rejection on a one-on-one basis when one person says ‘no more.’ I believe that laws support people who choose to stand up and be courageous and do what is right."

We are super excited to soon be convening in Philadelphia for the Soulforce Symposium. We hope that you will join us for two important events prior to the Symposium on Friday November, 5th.

The first of these two events will take place at The William Way Community Center in Center City Philadelphia. There will be a reception at the center from 6-8pm. Free wine, beer, and refreshments will be served. Attendees will have the opportunity to hear music, and to meet and mingle with the staff and board members of Soulforce. The William Way Community Center is located at 1315 Spruce Street - Philadelphia, PA 19107 and is in within walking distance of the LIFE rally.

The second event on Friday will be our LIFE rally at Love Park also in Center City Philadelphia. The rally will commence at 8:30pm. The rally is the city’s response to the heinous amount of LGBTQ suicides and other hate crimes over the last several months. There will be music and local and national speakers. Love Park is located at the corner of 15th and JFK Boulevard. You can RSVP for the rally (although an RSVP is not required to attend) at our Facebook page.

Check back often over the next few days and throughout the symposium for frequent updates and additional content!
Even if you can’t make it to Philadelphia, please help us sponsor future events by donating today. 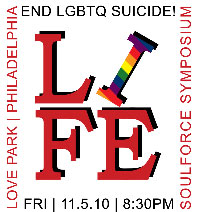 The news over the past several weeks has been astounding.

Increasingly, LGBTQ youth are feeling the burdens of an unjust society as they are bullied and taunted for being who they were created to be. Recently, 5 youth made national news after suicides – and the lives of countless other LGBTQ people are gone and unreported.

We must take a stand in solidarity, support and love to let LGBTQ people know they are loved and affirmed, exactly as they are! We must put an end to this systematic oppression that persecutes our LGBTQ friends, family, and loved ones and we must create a better world for ourselves and all those in it

Join us on Friday, November 5 at 8:30pm at Love Park in the heart of Downtown Philadelphia as we celebrate life with a rally and a special performance from singer/songwriter Ray Boltz. Find more information on our Facebook event.

This event is one of many taking place during the Soulforce Symposium, an effort to disperse the truth about religion, science, and reparative therapy.

Soulforce will be joining the group Affirmation in San Fransisco on Oct 6th as they rally to end LGBTQ youth suicides.

Even if you can’t attend the symposium or rally please donate so that Soulforce can continue to support the work for equality and full inclusion of all LGBTQ people!

The accomplished singer/songwriter Ray Boltz will be making a special appearance at the upcoming Soulforce LIFE Rally to be held in Philadelphia. The rally is being held to bring awareness to the staggering number of LGBTQ youth and young adults who are driven to suicide by teasing and relentless bullying.
This issue is especially prevalent at the moment with five recent suicides making national headlines within the last 3 weeks. Countless  suicides and other hate crimes go unreported each year.

Please plan to attend the rally and/or support Soulforce financially so that we can sponsor this and other programs. Find more info about the rally on our website and also on our Facebook event page.

You can also donate to help us make all of our programming accessible and sustainable.