The young adult organizers of the Equality Ride use a collaborative approach, writing to college administrators months in advance and inviting them to work together to design programming that examines diverse points of view — including points of view that affirm gay and transgender students.

Recently, Ouachita Baptist officials responded with an invitation to meet at Hammons House, a building on the outskirts of campus. After discussing the situation with school officials and visiting the location, Riders decided to accept the offer in order to have the most time possible for productive dialogue.

"Although the location that Equality Riders were offered on campus was not ideal, we felt that we could reach many students for productive conversations regarding Christianity and lesbian, gay, bisexual, and transgender people," explains Rider and OBU stop organizer Abigail Reikow. Equality Riders estimate that they spoke with between 100 and 200 students on the campus, which has a total student population of 1,448.

Throughout the day, groups of Ouachita students came to dialogue with Equality Riders. Some brought refreshments to share. Others thanked the Riders for bringing an LGBT-affirming perspective to the campus. The Ouachita Baptist University student handbook states that, "human sexuality is a gift from God for procreation of human life and for the expression of one’s love through marriage" and lists "homosexual acts" among the "misuses of God’s gift." Students in violation of these guidelines face penalties ranging from "verbal warning to expulsion."

Reikow and other Riders planted the seeds of new ideas by giving away more than 70 apples labeled with facts about LGBT Arkansans, LGBT-affirming Bible quotations, and stories of local LGBT and ally families. Conversations throughout the day were respectful and productive and continued until around 5:00PM.

"It was clear that students were interested in having these conversations. I think the Equality Ride brought a vital affirming voice for gay, lesbian, bisexual, and transgender people and hopefully the Equality Ride’s visit is the first step in an extended and continuous conversation about faith, sexuality, and gender," says Katie Higgins, Equality Ride Co-director.

Equality Riders will be available on Thursday to speak to students and community members at the Henderson College library from 2PM to 5PM. All are welcome to come and join Riders for discussion. The Equality Ride will return to Central Baptist College on Friday, when the Baptist Missionary Association will be meeting on campus in order to stand vigil and hopefully engage BMA leadership about faith and fairness at Central Baptist.

Since 2006, the Equality Ride has visited more than 50 schools, hosting public forums, participating in panel discussions, and taking part in worship services and Bible studies. The goal is to inspire further conversation and to empower students, faculty, and administrators to make their school welcoming to all students.

The Equality Ride bus is on the road through November 13, 2008. Future stops include: 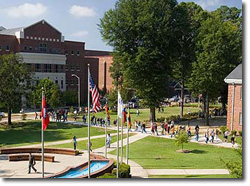 The Equality Ride stop at Ouachita Baptist University is November 5, 2008.

The Equality Rider organizing the stop at Ouachita Baptist University is Abigail Reikow.

Back to the Equality Ride Homepage